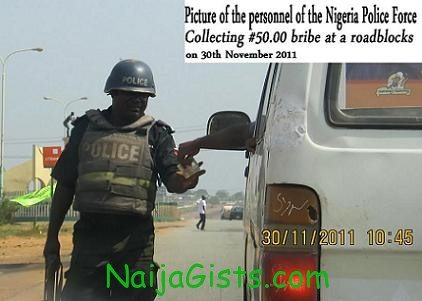 An Inspector of Police attached to the Lagos State Command, Southwest, Nigeria, has been arrested and detained at Area ‘G’ Police Command headquarters, Ogba, Ikeja after shooting an engineer in the leg for failure to give him bribe at a check point. naijagists.com

The inspector identified as Martins Olatilewa attached to Alakuko Police Division was alleged to have shot Godspower Philip Odiete at a check point at Yusuf junction, Alakuko area while he was returning from work in the evening.

Olatilewa allegedly cocked his AK 47 rifle and shot the victim after he was informed that Odiete did not drop any money with his colleaques who had stopped him at their checkpoint.

After the shooting, Olatilewa attempted to escaped, but the victim with his brother who was inside his car raised an alarm and he was caught.

He was later dragged to the Alakuko station where the Divisional police officer ordered that he should be detained while the matter was transferred to Area ‘G’ Command, Ogba.

Odiete was later rushed to Ikeja General Hospital, Lagos where he is being treated after the police issued a report, at his own expenses.

He was later transferred to a private hospital.

Narrating his ordeal on the hospital bed, Odiete said that he was returning from work and was close to his house where Olatilewa with other police men were allegedly extorting money from motorists at a check point.

He said when he got there, the policemen asked him to settle them, but he explained to them that he had no money on him.

They allowed him to go, but on getting to the spot where the inspector was, he demanded to know how much he gave to his men.

He said he told the Inspector that he did not give them any money.

“He became annoyed and I got out of my car to explain to him but he did not listen to me. The next thing he did was to cock his Ak47 gun and shoot my left leg,” he narrated.

Odiete said the Alakuko DPO promised that the police will pick his hospital bill but they only gave him a report and dumped him at the Ikeja General Hospital.

When our news cast visited Area ‘G’ Police Command yesterday, the suspect was still detained in the cell.

The police declined to make any comment on the matter. But a source at the station told our reporter that investigation has commenced on the matter.