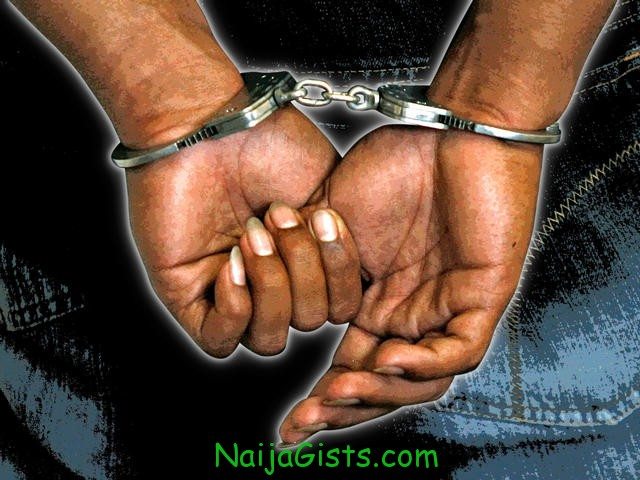 Men of the Special Anti Robbery Squad, SARS, have arrested the leader of a four-man robbery gang who raped a teenage seamstress during their operation at Igando in Alimosho area of Lagos State, southwest Nigeria. naijagists.com

Three members of the gang of cab robbers were also arrested at their hideout in Ijegun near Ikotun also in Alimosho council area of Lagos.

The gang leader who allegedly raped an 18-year old seamstress (names withheld) was identified as Rotimi Adeluola. He was said to be a cab operator popularly known as kabukabu.

According to a reliable source Adeluola with his suspected gang members terrorised residents of Egbeda, Ikotun and its environs before they were nabbed .

He was identified with a car he used to operate as a cab which he diverted to their hideout. Each time the suspect picks his victims in the cab, he takes them to the hideout where his gang members dispossessed them of their valuables at gun point.

The gang leader allegedly robbed the lady of N57,000 after he had collected her UBA Automated Teller Machine, ATM card.

When SARS operatives stormed the gang’s hideout, eight suspects were initially arrested. But during an identification parade, the two victims identified Adeluola as the person who robbed them on 30 January.

Narrating her ordeal, the raped victim said she was on her way to her shop when she boarded a cab to Ejigbo. But the driver diverted the cab at Ronik junction and headed towards the suspects’ hideout.

“When I tried to raise an alarm, the gang leader showed me a gun and threatened to shoot me. They told me to cooperate. It was at their hideout they raped me. Later they took me on okada (motorcycle) to my bank to collect money.”

Adeluola, 42, a father of 4 resident at 40, Ayo Oyekanmi Street, Ijegun, described himself as a fraudster who engaged in 419-related business and not a robber.

He claimed police arrested him while he was inside his house on the allegation that he raped and robbed the female victim and another man.

Recalling his experience, Ozeomena said he boarded the cab driven by Adeluola who, along with some of his gang members inside the car robbed him at gun point.

He said the incident was reported to the RRS but the gang managed to escape.

Ozeomena, 23, a trader from Enugu State said he returned from the East when the police informed him they had arrested the robbery suspects and he was able to identify Adeluola and his gang members who robbed him in the cab. According to sources at SARS, the four robbery suspects, including Joseph Okoro, Joshua Adeyemi, 76, and Sylverster Orji will soon be arraigned in court.