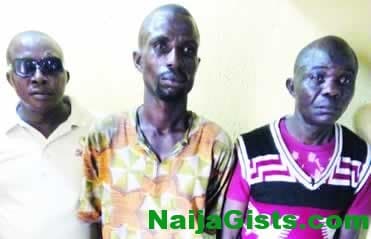 A police sergeant serving at the Oworo Police Division, Lagos State, Yakubu Aiyegba, and a retired Assistant Superintendent of Police, Obosa Augustine, have been arrested for alleged robbery.

They were apprehended along with a taxi driver, Godwin George, by operatives from the Shasha Police Station.

PUNCH Metro learnt that Aiyegba and Augustine were notorious for raiding a hotel in Egbeda and extorting money from guests in the facility.

They reportedly paraded themselves as operatives of the Special Anti-Robbery Squad, Lagos State Command.

They were said to have forcefully collected a sum of N50,000 and a laptop from an unnamed guest a few weeks ago and fled the area in a taxi driven by George.

Our correspondent gathered that the three suspects, led by the retired ASP, went back to the facility – Ehis Hotel – on Wednesday on another extortionate raid.

They were allegedly in the middle of the act when operatives from the Shasha division, who acted on a tip-off, stormed the hotel and picked them up.

The suspects were subsequently transferred to SARS in Ikeja.

A police source told our correspondent that the command had been monitoring Augustine and Aiyegba for some time after receiving complaints from the hotel.

He said, “There have been a series of complaints about SARS operatives extorting money from members of the public. We found out that on many occasions, the people impersonated SARS men.

“On Wednesday, there was a similar case. Augustine and Aiyegba went to Ehis Hotel to rob guests, parading themselves as SARS operatives. They usually go to that hotel on illegal operations.

“Three weeks ago, they collected N50,000 and a laptop from a guest. That Wednesday, they were going from one hotel room to another to disturb the guests when the police were alerted.”

However, in a chat with PUNCH Metro, Aiyegba, a 39-year-old Kogi State indigene, said they did not go to the hotel to rob. He said they were friends to the hotel manager, one Kingsley, who normally gave them money.

He said, “Two weeks ago, we visited Kingsley at the hotel and saw some people smoking on the premises. We threatened to arrest them, but they begged us. Because of our friend, Kingsley, we left them.

“At times when we visit Kingsley, he would give us N1,000 to buy cola nuts. We don’t normally disturb him. On Wednesday, Supol (Augustine) told me that Kingsley called him that we should come.

“On getting there, we met some boys smoking. When they sighted us, they called their friends to fight us. Policemen from Shasha division later came to arrest us.”

The 52-year-old retired officer, who hails from Edo State, said he went to the hotel because of the good rapport he had with Kingsley before he retired from the force.

“I have four children and a wife. I retired this year while at the Idimu Police Division. The manager always gives me money. He called me on Wednesday to come and collect money.

“As we got there, somebody said we collected N50,000 and a laptop from him three weeks ago, which is just an allegation. We didn’t rob anybody. We did not impersonate SARS,” he added.

George, the taxi driver, stated that he was not involved in the alleged robbery, adding that he stayed outside the hotel.

He said, “I know Aiyegba as a policeman and he introduced me to Mr. Augustine. I have taken them to the hotel thrice. They would give me a drink and ask me to stay outside.

“After meeting with the manager, they would fuel my car or give me N1,500.”

While Olowu and Ogundipe were picked up in the Ketu area, Adebola was apprehended in the Ikate area of Lagos State.

It was gathered that Olowu, Ogundipe and their accomplices at large robbed two commuters in Ojota and Ketu, while Adebola snatched a bag belonging to one Helen Susan.

Olowu, in his statement to the police, reportedly confessed to committing the crime in Alausa, Ikeja, where he and his gang members had attended an event on Friday.

He said, “We were at Ojota around 5am after leaving the party to board a bus to Ikorodu. I dipped my hand into another passenger’s pocket when we were rushing. I removed his phone and passed it to my colleagues, Ayobami and Jide.

“The owner held my hand and prevented me from joining the bus. Ayobami and Jide, who I gave the stolen phone, went away while RRS men arrested me.”

Ogundipe stated that he was in company with nine other accomplices from the party when they accosted one Pastor Adetayo Samuel, who wanted to board a bus to Ibadan, Oyo State, at old toll gate, Ketu.

“We collected three mobile phones and N6,000 from him. We fled the scene immediately and we broke into three groups. We were trailed by a RRS patrol team who received complaint from our victim. They arrested me while I was trying to board a bus to Ibafo (Ogun State),” he said.

The third suspect, Adebola, said, “I was going to Ajah. Just before I got to Chisco, Maroko, at about 11pm, I snatched a lady’s bag. I attempted to escape but the RRS men were in my front. They recovered the bag from me.”

The PPRO, Famous-Cole, stated that the three suspects would be transferred to the State Criminal Investigation and Intelligence, Yaba, for further investigation.