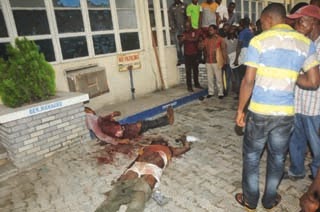 A robbery operation took Port Harcourt by storm in the early hours of Monday when 4-man robbery gang stormed a Newspaper company and attacked their workers.

The owner of the Newspaper corporation was alerted around 1:12am. He immediately notified the police who rushed to the scene.

As usual, the police engaged the robbers in gun fight with residents hearing pa pa pa papa (gunshots). In the gunbattle, a police officer was killed while 2 of the robbers were shot dead.

“I got a distress call from my staff around 1:12 am and immediately alerted the police through one of the police emergency numbers.The police quickly swung into action and arrived our premises.Two of the robbers were gunned down. Unfortunately, one of the mobile policemen was shot dead in our premises,” The owner of the company said.

The Nigerian police needs more training when it comes to tackling anti robbery operations like this.

it’s time the Police learn certain drills in such situations. They are like bulls charging without a strategy. From when they get a distress call to how they resolve that is key and not just exchanging in gun battles straight away! I bet the public wasn’t informed to stay away from the crime seen.

The first thing police should do is to first cordon off the area, so they have a space to work with and so on! from the picture it seems like a show, people gathered round looking like they have no other places to go. The police should always ensure they preserve the crime scene for proper investigation to the carried out, where are the forensics?

Who stripped one of the robbers lying on the floor? There are a lot of things wrong, the Police are faced with such common crime daily and should by now be able to learn from the many scenarios and ensure that their men are protected first! if the police is vulnerable then the public is vulnerable!

RIP to the officer killed on the line of duty.