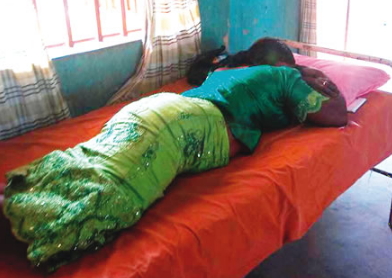 December 28, 2016 – Married Policewoman Beaten To Coma By Immigration Officer In Adamawa For Turning Down His Love Advances

A female police officer is currently battling for her life at Nodinga hospital in Adamawa state hours after an official of Nigeria Immigration service battered her.

The suspect (name withheld) reportedly approached the police woman at a checkpoint in Sugu area of Ganye Adamawa state on Monday and requested for her phone number. However she turned down his request citing the fact that she is a married woman travelling to her hometown of Toungo to spend some time with her family.

When she turned down his love advances, the NIS officer was said to have dragged her out of the bus and beat her into a coma before other passengers intervened.

She was rushed to Nodinga hospital where she was revived.

The victim is still clinging to life as Adamawa Police Command refused to disclose her identity.

Her attacker has been arrested.