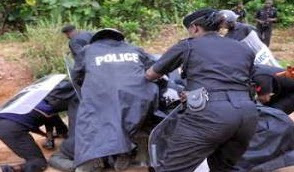 Yesterday, three officials of the Nigerian Police Force were caught unaware by some criminals.

The officers were patrolling the Idu Industrial Estate in Karmo area of Abuja in the wee hours of yesterday Tuesday the 27th of December 2016 when some suspected armed robbers opened fire on them.

All the three officers reportedly died on the spot.

A mechanic in the area said:

Policewoman Beaten To Coma By Immigration Officer For Turning Down His Love Advances
Owerri Fidelity Bank Robbery Suspects: We Rob During Christmas & New Year To Live Like Rich Men