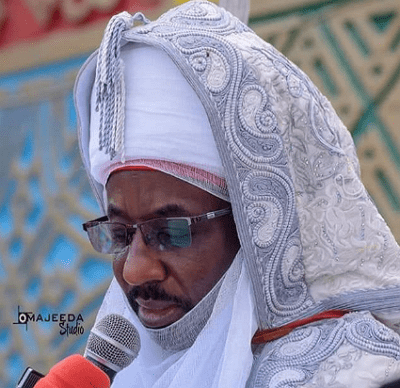 Sanusi Blames Politics For Dethronement, Urges Emirs To Learn How To Relate With Politicians In Their Domains

Loko town village head, Ahmed Sabo, has revealed the state of mind of Sanusi Lamido, who was recently dethrone as the Emir of Kano.

According to Sabo, Sanusi was relocated to Awe because Loko lacked the social amenities that befitted his status.

The village head, who spoke in an interview on the Hausa Service of the British Broadcasting Corporation monitored in Kaduna said the deposed monarch spent a night in Loko before his transfer to Awe.

Sabo noted that the former Emir while in the village looked unperturbed, saying he slept well on his first night.

He added that the Sanusi admonished them (monarchs) to know how they relate with politicians in their domains.

On whether Sanusi regretted being removed during their discussion, the Village Head said, “Sanusi said he does not have any regret because he said he did not commit any offence. He was not disturbed at all.

“In fact, he slept very well. He accepted his destiny. He advised us that we should know the way to relate with politicians because there is nothing that brought about this dethronement except politics.”

Continue Reading
You may also like...
Related Topics:sanusi blames politics dethronement, where is sanusi lamido sanusi based now