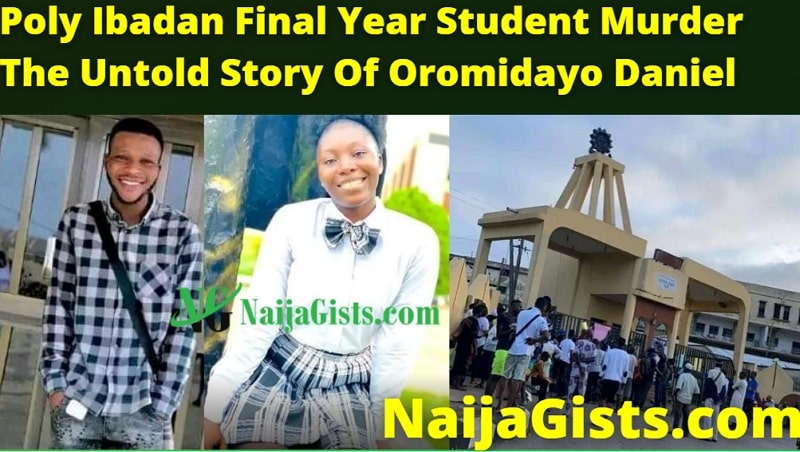 There is more that is yet to be revealed over the death of Oromidayo Daniel, a student of Poly Ibadan who was found lifeless and unclad in his hostel room with his girlfriend, Aramide Adeleke.

The final year student of civil engineering that lost his parents about two weeks ago and lost his brother last weekend was found lifeless in his hostel room on Monday.

Even though different stories have been emerging following his murder, a colleague of the deceased reportedly told NG via email today that Oromidayo was murdered by some guys that have been fighting the family over their landed properties in the past 5 years.

The suspects who reportedly killed his parents and his brother were said to have carried out the attack that claimed Oromidayo’s life on Monday.

The source said after killing Oromidayo, they locked the room and moved his generator close to his hostel door so as to make others believe he was killed by Generator fumes.

Sadly, the blood gushing out of his head exposed the planned murder.

NG source urged authorities to go after the killers of Oromidayo before they wipe out his entire family.

The deceased we learnt has another younger brother who is currently in custody of their extended family members.

His girlfriend who initially survived the attack has died at UCH.

The source said Oromidayo Daniel’s attacker reportedly slashed Aramide’s private to make it feel as if she died of sex romp.

They also left 2 used sachets of Tramadol 50mg tablets on the scene of the planned murder to make officials believe that Oromidayo Daniel used all the sex enhancement drug which led to his death.

Here are two questions our source want the investigative authorities to know….

How can a man that lost his brother over the weekend engage in such sex romp and used that many sex enhancement drugs?

What happened to the huge cut on his head?.

What is the cause of the huge vagina tears found on Aramide Adeleke at UCH.

When they were found lifeless, the hand of the deceased was found wrapped around his girlfriend in a staged format.

We hope all these points will help investigators unravel the mystery behind his murder and bring the perpetrators to book.