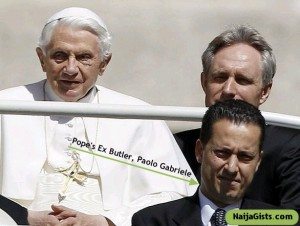 The former butler of Pope Benedict, Paolo Gabriele has been jailed for 18 months after he was found guilty of stealing confidential documents from the Pope. naijagists.com

Speaking before the verdict, he said he acted out of love for the Church and did not see himself as a thief.

Gabriele had denied the theft charge but admitted photocopying documents and “betraying the Holy Father’s trust”.

Gabriele’s lawyer had asked for the charge to be reduced, but described the sentence as “good” and “balanced”.

Christina Arru later said she did not intend to appeal against the verdict, Reuters reported.

The agency quoted her as saying Gabriele was “serene” about his fate and “ready to accept any consequences”.

Vatican Radio and the Vatican daily newspaper have devoted little space or time to the trial as they are giving major prominence to a conference of bishops from around the world which begins in Rome this weekend. The subject: The New Evangelisation – or how to stop the current haemorrhage of believers in many formerly predominantly Catholic countries.

A swift end to the trial of Paolo Gabriele was part of Vatican strategy to regain confidence among believers after an embarrassing string of scandals inside the headquarters of the Roman Catholic Church.

Gabriele is “very likely” to be pardoned by Pope Benedict, Vatican spokesman Federico Lombardi said, though it is not clear when this might happen.

The former butler was accused of stealing and copying the Pope’s documents and leaking them to an Italian journalist.

The BBC’s David Willey in Rome says official Vatican media have almost totally ignored the trial since it began and morning radio bulletins have omitted to mention the story.

The verdict was delivered after two hours of deliberation by the judges.

Presiding judge Guiseppe Dalla Torre handed down a sentence of three years, then cut it to 18 months on the grounds of Gabriele’s lack of a criminal record, his apology to the Pope and past services rendered to the Church.

The former butler will also have to pay court costs out of his own pocket.

Gabriele has now been returned to house arrest inside his Vatican apartment, where he has already been confined for several months.

The verdict brings to an end a week-long trial that has revealed an embarrassing breach of security at the highest levels of the Vatican.

On the last day of the trial, defence and prosecution lawyers gave their closing arguments, and Gabriele made a final appeal.

“The thing I feel most strongly is the conviction of having acted out of visceral love for the Church of Christ and of its leader on earth,” he said.

Ms Arru accused the Vatican police of irregularities and failures during their investigations.

She asked the court to reduce the charge to common theft or illegal possession, saying Gabriele had high moral motives although he had committed an illegal act.

Prosecutor Nicola Picardi had sought a three-year sentence, with an indefinite ban on Gabriele holding public office or positions of authority.

During testimony, the three judges presiding over the court heard how Gabriele used the photocopier in his shared office next to the Pope’s library to copy thousands of documents, taking advantage of his unrivalled access to the pontiff.

He would later pass some of them on to journalist Gianluigi Nuzzi.

In 2010 Mr Nuzzi released a best-selling book, entitled His Holiness, largely based on the confidential papers and detailing corruption, scandals and infighting.

Its publication sparked the hunt for the source of the leaks inside the Vatican, leading to Gabriele’s arrest in May.

Police also told the court how they found thousands of documents at Gabriele’s home, including some original papers bearing the Pope’s handwriting. Some had the instruction “destroy” written by the Pope in German on them.

Although Gabriele entered a not guilty plea, prosecutors say he confessed to taking documents during an interrogation in June, a confession he later stood by in court.

He told prosecutors he hoped to reveal alleged corruption at the Vatican, and believed that the Pope was being manipulated.

“I feel guilty of having betrayed the trust of the Holy Father, whom I love as a son would,” he told the court earlier this week.

Our correspondent says the Holy See wants to see rapid closure of the scandal, as this weekend the Church is beginning what it calls a “year of faith”, a series of initiatives aimed at reviving Christian faith in formerly predominantly Catholic countries currently seeing creeping secularism. (BBC)

US Embassy In Nigeria Discriminate Against Pregnant Women?
Cossy Orjiakor Receiving Death Threats – Some People Are After My Life