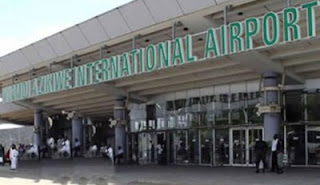 During the busiest travel seasons of the year, we learnt over 70 flights were delayed in Abuja yesterday when a total blackout hit the popular international airport.

According to a source, the power failure at Nnamdi Azikiwe International Airport in Abuja was caused by faulty electrical outlets.

An insider said the power failure lasted for 3 hours with no reasonable explanation from Federal Airports Authority of Nigeria(FAAN) and other relevant authorities.