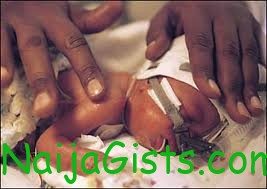 A 29 year old man, Odinaka Auyikamba, has been arrested by the police at Takwa Bay Division, Lekki, Eti-Osa, Lagos State, southwest Nigeria, for beating an eight-month pregnant housewife to a state of comma, a development that resulted in the premature delivery of her baby. naijagists.com

He was charged before an Igbosere magistrate’s court on a three-count charge of felony and attempted murder.

The police prosecutor stated in charge F/16/2012 that the accused was arrested following a complaint by the family of the victim that the accused and others (now at large) on 26 April, 2012 at about 2 a.m. invaded the residence of the victim at Sabo area of Takwa Bay, Eti-Osa. They allegedly asked of her husband for undisclosed reasons.

When she demanded to know why they wanted to see her husband, they descended on her, beat and kicked her on the stomach. She then fainted and started bleeding.

Believing that she was dead, the invaders allegedly abandoned her and fled.

Neighbours were said to have rushed her to a nearby hospital where she was revived and in the process delivered a premature baby.

The accused was trailed and arrested by the police at a hideout.

The offences, police prosecutor, ASP Olaide, said contravened Sections 409, 171 and 228 of the Criminal Laws of Lagos State of Nigeria, 2011.

The accused pleaded not guilty to the charges and the presiding magistrate, Mrs. O. I. Oguntade, adjourned the matter till 30 May, 2012 when his bail application would be considered. The victim is still recovering in the hospital.