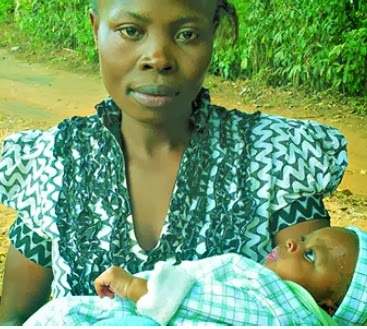 The shocking story of how a woman, Ms. Oluchi Merife (maiden name) was delivered of a male child after four years of pregnancy has continued to dominate discussions in and around the Oji-River area of Enugu State. Before she was finally delivered of he baby on December 13th, 2013, Oluchi a mother of two who hails from Ndiagbor in Aninri Local Government Area of Enugu State had to be abandoned by her husband Azuka Uchendu when she couldn’t deliver after two years.

The woman who narrated her four-year ordeal to reporters at Oji-River alleged that at a point her husband taunted her with the pregnancy saying that she merely had a swollen stomach. She also disclosed that her husband who hails from Mgbidi in Awgu Local Government Area of Enugu later eloped with another woman when the crisis continued. According to her; “I took-in in 2010 and was attending ante natal clinic. By the 5th month I was given date for delivery. But at the sixth month I started seeing my period; at the hospital they told me that the child was going down and wasn’t growing any longer.

They sent me for an ultra sound scan which was negative indicating that there was no child in the womb. “In 2012 a man gave me some money and asked me to go The Lord’s Chosen headquarters in Lagos that I will be freed. I went as directed but nothing happened. By then my husband had left me and went to live with another woman in Ituku. I continued running around for solution to my problem; I packed out from where we were staying at Dodo in Oji and moved down to Achi.“While the hospitals say that the baby was no longer there, prayer houses kept telling me that I was carrying a male child and that his name will be Jeremiah.

They continued to pray for me throughout 2012.“In 2013 a man of God Pastor Faith told me that I was carrying a male child. He also said that seven years after his delivery I should hand him over to a pastor. “After a crusade in 2013 I started feeling something in my womb as though someone was cutting a tape inside me. After that a Pastor called Sunny from Enugu asked me to go for ultra sound scan that God has destroyed what was used to cover the baby. “Just as the Pastor prophesied, the ultra sound scan showed that I was seven months pregnant.

Afterwards I continued going for prayers and was later given December 12 date for delivery. But the date came and passed without any signs of labour so the next day being Friday December 13th I went to Bethsaida (The Enugu healing water).“I went to the river and poured out my heart to God; I told Him that my husband had abandoned me; that my husband’s people taunt me that I wasn’t pregnant that I was carrying leather; while my husband says I had swollen tummy. I asked God to show that He is God and shame the devil by delivering me of the baby. I also told God that I wouldn’t want to go through caesarian operation but should have safe delivery. “After my visit to Bethsaida on Friday the next day I went into labour and by 3:30 am on Sunday I was delivered of this baby boy who I have named Jeremiah as the men of God prophesied.”

The woman who said she has not heard from her husband or his family since she delivered appealed to well meaning Nigerians to come assist the new born baby and her 7-year-old daughter as they live on charity without any major means of livelihood.
Source