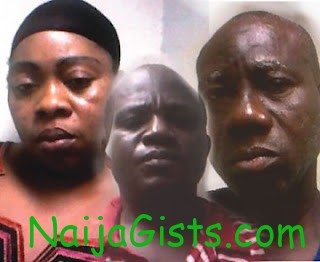 A 40-year old pregnant woman named Sade Aminu and two other men were recently caught in Abuja enroute London with over 3.0kg of ingested Cocaine. naijagists.com

One of the suspect, a 63-year old Grandpa, Matthew Obisesan (real name Yusuf  Yakub) claims he agreed to carry cocaine because he has three wives and his business is not doing very well.

According to the third suspect is Amaso Arovo, 44,  “I am a trader. I was lured into drug  trafficking. This is my first time. I have never smuggled drugs in my  life. They promised to pay me £4,000.”

The Abuja Airport Commander of the  National Drug Law Enforcement Agency, Mr. Hamisu Lawan, confirmed the  arrests, adding that all the suspects were detected with the aid of  scanning machines.He said that the only female suspect,  Aminu, caused a stir by refusing to go through the scanning machine on  the grounds of pregnancy.

He said, “The arrests were made possible  by the body scanning machine during screening of passengers at the  central screening area. Sade refused to go through the scan during  screening.“She insisted that she was pregnant and  that the scan would harm her unborn baby.

However, while she was under  observation, she excreted wraps of cocaine weighing 1.05kg. When  eventually she was made to undergo a pregnancy test, the result was  negative. “Preliminary investigation shows that  (Matthew Olabanji) Obisesan, whose real name is Yusuf Yakub, is a  resident of Kwara State but lives in Ibadan.

(Arovo Moses) Amaso was on  his way to Madrid through London Heathrow on the same British Airways  flight with Obisesan.“Alhaja (Aminu Modinat) Sade, a divorcee  and the only female was however arrested on her way to London through  Frankfurt on a Lufthansa flight LH 563.

All the suspects have owned up  to the crime and are cooperating with team of investigators.”