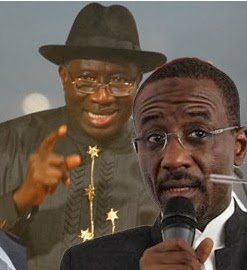 Mallam Sanusi Lamido Sanusi, the current Governor of The Central Bank of Nigeria has spoken against President Jonathan’s attempt to force him out of office before his tenure expires on June 2nd, 2014.

CBN sources confirmed that Sanusi has made up his mind to resist any attempt to force him out of office before June 2 when his tenure expires.

This position was further confirmed by the CBN’s spokesman, Mr. Ugo Okoroafor. According to him, Mallam Sanusi told members of the management at a meeting on Wednesday that he would be in office till  June and did not even indicate that he might proceed on any terminal leave before completing his tenure.

Sanusi’s insistence on staying in office till June this year followed the storm provoked by President Goodluck Jonathan reportedly ordering him to resign as reported by a national newspaper yesterday over allegedly leaking a letter Sanusi wrote to him (President) claiming that $49.8bn oil revenue was missing.

Sanusi’s position has received support from lawyers who said that the President lacks the constitutional powers to direct the Governor of the Central Bank to resign from office. Most of the lawyers, yesterday, maintained that only a two-third majority of the Senate can validly sack the CBN governor from office.

If the former CBN Governor Charles Soludo was sacked by the then head of state, what gave Sanusi an impression that President Jonathan can’t sack him?