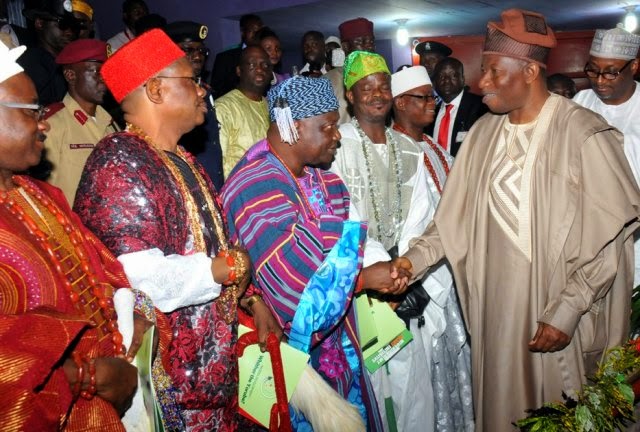 The group claims Jonathan is seeking reelection support from the Yoruba nation too late.

In a statement signed by the group PS, Kunle Famoriyo, the ‘Yoruba Progress Summit’ which held last Friday was described as an afterthought and a futile effort to sneak Goodluck Jonathan into the Yoruba land through the backdoor.

“For the past five years under his administration, Yoruba people have been deliberately marginalised and skewed out of national reckoning, especially in terms of key appointments and opportunity to partake in key sectors of the economy,”.

“In any case, we do not need a ‘Progress Summit’ in Yoruba land. We already have a progressive culture based on democratic and egalitarian values.

“What Yoruba nation needs is how to be delivered from the retrogressive forces imposed on us by the Nigerian state.

“The Yoruba nation was well ahead in terms of development until the forced union called Nigeria began to steal our institutions from us.

“Obafemi Awolowo University (OAU), being one of the stolen institutions, is good only to address the need to restructure Nigeria, not for an effort to sustain the status quo,” the group added.

“We reckon this is the best form of public governance that gives us the opportunity to develop at our own pace and contribute our quota to Nigeria’s development.”

“We dare say that more than any so called leader at that event, those students, who brave all the odds to tell Mr. President the truth, are the true leaders, irrespective of their ethnic origin.

“ARG therefore salute the courage of those students who spoke truth in face of oppression and we enjoin every Nigerian to replicate their courageous act,” ARG said.