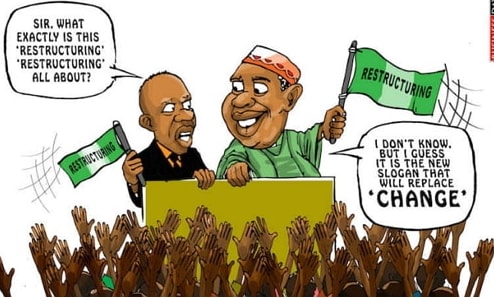 In the light of many eye-sore and ear-sore episodes which have characterised contemporary every day lived experiences of Nigerians, it is practically impossible to allow our dead leaders-of-thought to rest in peace; I need to invoke the spirit of the unusual being, Fela Anikulapo Kuti, for a perspective on Authority Stealing. The tragedy of our history is that we allow history to repeat itself; perhaps because the political leadership deliberately silenced the teaching of history for a long time. Our individual lives are fraught with the same sin and this explains why it is convenient for us to transport this into public life. How can one explain the verbal vituperations between the All Progressives Congress (APC) and alleged looters of the Peoples Democratic Party (PDP) other than a shameful and open display of weak prosecutorial will of the former against the tactical condemnation of the condemners’ approach of the latter? It follows that the umbrella groomed and provided a cover for some of the alleged looters; but the wealth generated through looting and their actors were swept inward with the use of the broom just before 2015.

What do the masses benefit from such un-impactful accusation and counter-accusation? In Authority Stealing, Fela exposes how politically exposed persons or the leadership strategically utilise the opportunity provided by their positions to corner the wealth of the state. But because of their influence within the social structure, they get by with it as their friends cover their tracks. Probe of previous government therefore arises from conflicting interests as opposed to being in defence of the masses.

How many armed robbers, kidnappers, ‘common thieves’ and arrested street urchins were given the right of reply as allowed for alleged looters? For three years, the best we have seen is an APC that calls PDP thief and a PDP that replies with, I no be thief! While Lai Muhammad wraps his verifiable facts on the looters who are yet to be sanctioned according to law, an Ado Ekiti High Court sentenced one Raji Babatunde to death by hanging after being found guilty of armed robbery after stealing two Nokia phones, one Tecno, one bottle of Star Lager Beer, six bottles of Trophy and one packet of Rothmans cigarette while armed with axe and cutlass! Thus, while the rich still find ways to shield themselves after wrecking the greater havoc; our system nails the robber to the cross. The same law that they claim is loose in nailing the rich thief is tight enough to annihilate the powerless thief. This is what I call elitising corruption. Elitisation of corruption treatment is the order of the day. For the rich, they use name and shame with(out) prosecution but for the poor, its almost typically straight to conviction. But as Fela averred, ‘authority stealing pass armed robbery’. But the authority go dey sing: Catch am, catch am! Thief, thief, thief! Catch am, catch am! Rogue, rogue, rogue! Catch am, catch am! Robber, robber!

Authority man does not pick pockets on the streets but deals in freshly-minted naira and foreign currencies hidden in septic tanks, Ikoyi mansions, and deserted stalls at Lagos market, and abandoned millions in airport without identity till date. Authority looters are unmindful of party symbols. They can loot under the umbrella and legitimise and secure the loot in broom custody. Till date, authority people as Fela observed, do not need gun like armed robbers; the pen is mightier than a gun in looting career. ‘Authority man in charge of money, Him no need gun, him need pen, Pen got power gun no get, If gun steal eighty thousand naira Pen go steal two billion naira’. Fela must be a seer to rightly foresee that in 2018, authority looters will loot in billions. He was aware of the trick of people in authority when they use different lexicon in describing similar crime they commit for which a poor man has been sent to jail. Was it not one authority man that maintained that corruption is not stealing? One aide of another authority man said his boss rewards and protects those loyal to him rather than punish them for flouting his orders.

If the past government is blamed, how many public enquiry reports have been made public and treated legally as required by law under the present dispensation? If the ongoing ‘name and shame’ public service announcement of the Minister for Information is aimed at 2019 elections, it affords Nigerians to do a cost-benefit analysis of the anti-corruption crusade of President Muhammadu Buhari who has finally, declared to run in 2019. They can assess how the fight against authority persons “within” are silenced while those “without” are amplified. Nigerians can then decide on whether to entrust the nation in the hands of this Sheriff who gives the impression of helplessness in nailing ‘verified looters’ and instead pushes responsibility to Nigerians through the media. The same Nigerians who he and his comrades have not alleviated their sufferings since May 2015.

As 2019 elections beckons and with the formal declaration of the Prince of Daura, the political landscape will take a new turn of lies, propaganda and governance will hit ground zero. The electorates are presented with yet another opportunity to dismount authority looters and complacent leadership in the broom government and at the same distance their votes from ‘convicted’ looters in the umbrella party. From the land of the dead, Fela counsels us the living, to get rid of authority stealers and looters through our voting power because as it is evident from their stealing and looting, they are more sinister than armed robbers. If “in-authority” persons are finding it difficult to trap “out-of-authority” suspects with the law, then what we have is collaborative authority stealing. According to Fela, ‘we Africans must do something about this nonsense because now authority stealing pass armed robbery’. If the present situation is desirable, then Nigerians should retain it with votes but rid the country of dirt with the same constitutional votes if otherwise.

Dr Tade, a sociologist sent this piece via dotad2003@yahoo.com

Continue Reading
You may also like...
Related Topics:election, prince of daura