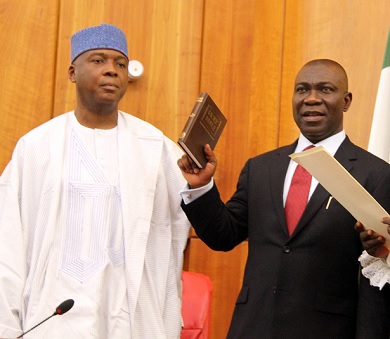 Stormy days are still ahead for the Senate as the Unity Forum has gone to court to seek annul­ment of the election of Senate President, Dr. Bukola Saraki and his deputy, Senator Ike Ekweremadu.

The Senated Unity Forum is loyal to Senator Ahmad Ibrahim Lawan, who is also the candidate of the All Progressives Congress (APC) for the position of Senate President. Sunday Sun learnt that the Forum instituted the case at the Federal High Court in Abuja seeking, among other prayers, annulment of the Tuesday, June 9 election of Saraki and Ekwer­emadu on the premise that the Senate Standing Orders used on that day was “a forgery.”

In the build-up to the case in court, Senator Suleiman Hunkuyi, representing Kaduna North senatorial district, had petitioned the Police on the al­leged forgery. Consequently, Ekweremadu, key staff of the Committee on Rules and Busi­ness and the head of the National Assembly’s Directorate of Legal Services, were all questioned on their alleged roles in the matter.

Sunday Sun can reveal that the case suffered a slight hiccup on Wednesday at the Federal High Court, Abuja, where the case was filed. But on Thursday, July 16, the details were finally perfected. It was gathered that the Forum is insisting before the court that a cursory reading of the Votes and Proceedings of the entire Seventh Senate and the Hansards did not reflect an amendment of the Senate Stand­ing Orders.

“Former chairman of the Rules and Business Commit­tee was the first to be invited by the Police and he has given a statement washing his hands off the amendments. The whole election of June 9 was a fraud; it should be annulled. You cannot build on something that doesn’t exist,” a source told Sunday Sun.

It was further gathered that no amendment was carried out.

A source who is close to the Unity Forum told Sunday Sun: “The leadership of the Saraki group knows this. It’s now a moral burden on them because those in charge of the rules know what they did. They should come out and tell Nigerians where, when and who sponsored the rules change.” In another devel­opment, it was gathered that “in 2014, the Committee on Rules and Business did propose 30 amendments to the Senate rules, which the leadership knew about and those proposed amendments of the Senate Standing Orders were laid on the table in the chamber. But, the leadership then, in its wisdom, didn’t see it through.” Regardless, a National Assembly source dismissed the Forum’s case in court, adding that the Senate, as an institution, was never dissolved, stating that it was only a session that ended in the first week of last month.

“It was only plenary that was adjourned sine die on Thursday, June 4. There was never a time there was no Senate, and if we do agree that there was a Sen­ate before the proclamation of a new Senate on June 9, why are members of the Forum crying wolf where there’s none?” the source said.