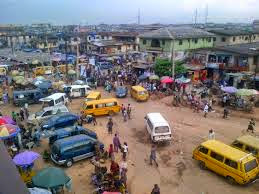 A popular commercial sex worker was murdered earlier this week on Lagos Island.

The mother of two simply identified as Joy was said to have been stabbed to death at a car park on Idowu Taylor Street in Victoria Island around 5:30 am on Monday.

25-year-old Joy who hailed from Delta State was in the company of his 3-year-old son when she was attacked.

This is what area resident said about the deceased:

“Joy is a well known woman on this street. We all liked her except for the work she did. She called herself a street hustler who needed to take care of her children. She is Urhobo. On Sunday evening, she was still seen around the car park.

“We were shocked when we woke on Monday morning to find her corpse with knife injuries. Her attackers stabbed her twice on the back. She was found in a pool of blood.”