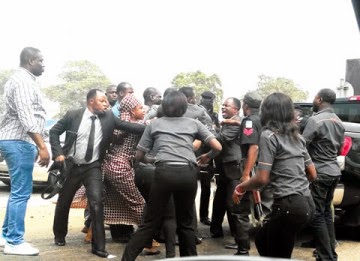 A scuffle broke out at the tollgate of the Murtala Muhammed International Airport, Lagos, between some police officers and officials of the Department of State Service over toll fee.

An eyewitness, Wale Williams, said the DSS officials, who also had some policemen in their convoy of three vehicles, seized a toll collector for allegedly demanding money from them, saying they were “officers of the law.”

Williams said other policemen guarding the tollgate were subsequently locked in a hot exchange with the DSS operatives and at a point, the officers pointed guns at one another.

He said, “The incident happened around 2pm on Sunday at the tollgate when I was coming back from church.

“The DSS officers and a few policemen were in three vehicles; they all had private numbers. The men were carrying guns.

“When they approached the tollgate, the toll official asked for money, but they said they were officers of the law and declined to pay.

“But the official did not allow them to pass, insisting that they had to pay him. So, they forced their way in. Then, they came down and dragged the guy out of his office cubicle.”

He said the officers started pummelling the unidentified toll collector, and not done, attempted to squeeze him into the trunk of one of their vehicles.

The situation was said to have caused a gridlock on the road, as some other commuters alighted from their vehicles to plead with the officers.

Williams said the policemen attached to the tollgate radioed their station and were ordered to bring the officials to the Bissam Police Station.

“The DSS officials too, who had sophisticated arms, pulled them out and it became a free-for-all. It was a real madness,” he added.

It was learnt that the DSS officials later agreed to follow the policemen to the station, at which point, Williams said he left the scene.

Our correspondent visited the airport on Monday and met with some officials at the tollgate, who equally confirmed the incident.

It was learnt that according to the rules of the tollgate, cars are supposed to pay N200, while sport utility vehicles and buses are to pay N300.

A top staff member at the tollgate, who craved anonymity, said, “It was only one of them that was a DSS officer. But they all claimed to be VIPs and came out of their cars to harass the boy.

“We don’t give exceptions to people here. The boy suffered unjustly.”