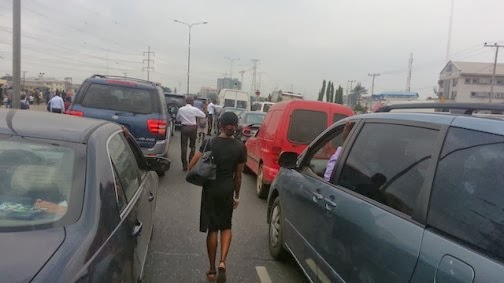 A traffic tragedy in which three school pupils were killed in an auto-accident early today on the Lekki-Epe Expressway, in Lagos, western Nigeria, has created an unprecedented traffic gridlock on the usually busy highway.

The tragedy led to a spontaneous protest by residents nearby and Area Boys. The protesters blocked the entire expressway, making passage in both directions, impossible.

The pupils were trying to cross the road from one side to the other.

A traffic gridlock stretching over 10 kilometres has built up on the road, on the way to Epe, trapping thousands of motorists going to work. A similar gridlock is also on the other side.

P.M.NEWs reporter trapped in the gridlock said the protesters also resisted the attempt by the police to evacuate the killed pupils and the vehicles involved in the accident.

The traffic lockdown which began at about 8 a.m this morning was still on at 10.30 am, at the time of this report.