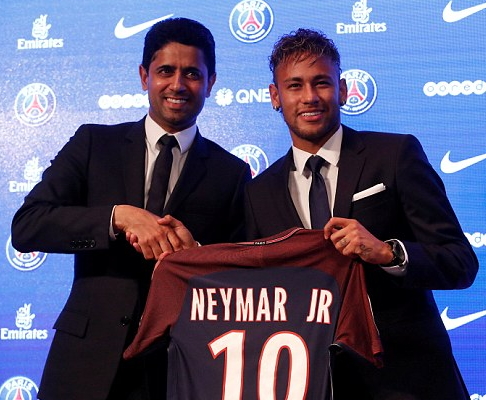 The highest paid footballer in the world, Neymar has been unveiled by his new club, Paris Saint Germain (PSG) following his world-record £198million move.

The Brazil striker has swapped Barcelona for Paris in a record-smashing deal – he cost over £100m more than the previous most expensive transfer – and has signed a £500,000-a-week, five-year contract.

Neymar said he had not been sure over his future for a long time but had been convinced to move by the other Brazilian players at PSG. He also said he had not moved in order to be the biggest star at the club, although he did not give an exact reason for wanting to leave Barcelona.

At a press conference held on Friday, Neymar said:

‘The club has a very similar ambition to mine, I want a bigger challenge. My heart made this decision, that is why I am in front of you today to help this team.

‘Being a star did not impact my decision, it is down to me wanting to find a new challenge. I am looking for something new. This is what PSG want, and they deserve it.

‘I leave a lot of very good friends behind, but that’s football. You make friends wherever you go, and that’s the main thing. It was the right time to leave and look for something different. Being the most expensive player is not a burden, I am happy.

‘I spoke with Brazilian players here at PSG, and they were happy for me to be here. I feel like I am at home already.’

Neymar said he was saddened by criticism from some Barca fans after deciding to leave and that while he respected the Catalan giants he had the right to seek a new challenge.