May 16, 2014 – Purported Bomb Found At Tinubu Square In Lagos Island Is Fillant

There was pandemonium yesterday when traders and residents around the Central Mosque area and Tinubu Square, Lagos Island were rattled when they heard that the content of a bag abandoned by an unknown person was a bomb.

People were scared as they scampered for safety to avoid being hit by the purported bomb. Some traders hurriedly closed their shops and went home.

But the situation was brought under control by policemen from the Explosive Ordinance Depot (EOD) who allayed the fear, saying the object was not an explosive device. 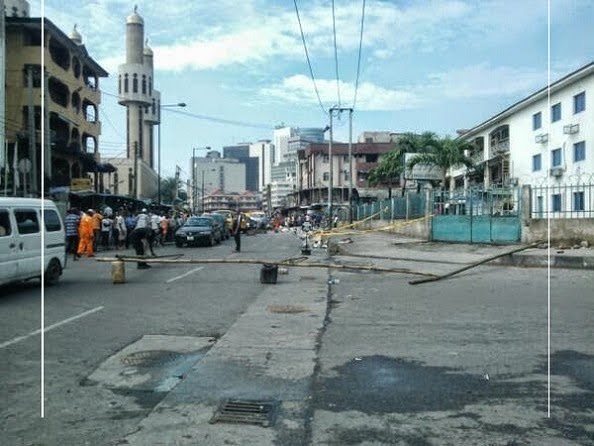 The EOD officers picked up the bag and urged the traders to continue with their businesses.

The state Police Commissioner, Alhaji Umar Manko, told Daily Sun,“there was no bomb anywhere in Lagos. The information is false. Lagosians should go about their businesses without any fear.”

Police spokesperson, Ngozi Braide, a Deputy Superintendent, however, said the content of the abandoned bag was not a bomb but sealants used in mending rusted parts of ships.

Braide, who commended residents for being security-conscious and for reporting to the police promptly, said operatives from the anti-bomb unit were deployed immediately they got the information.

“We deployed operatives from the anti-bomb unit who went to the scene, cordoned off the area and recovered the bag. It was taken for analysis and was discovered to be fillants.

“That place is a market place and it could have been dropped by somebody. Lagosians should remain calm, as there is no cause for alarm. The security of lives and property is important to the Commissioner of Police, Umar Manko. He is leaving no stone unturned to achieve it”.

The fillants are substances used in fixing ships when there is leakage.

When the bag was spotted in the morning, some of the residents and traders abandoned their homes and wares and fled to the area.

Some were even calling their friends and relatives on the Island to inform them of the suspected bomb and the need to stay away.