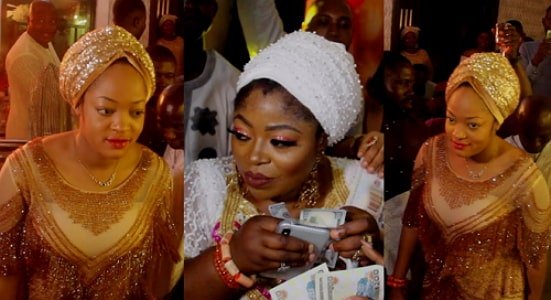 Less than a year into her matrimonial life as the dashing wife of the Ooni of Ife, His Imperial Majesty, Oba Enitan Adeyeye Ogunwusi and as the Yeyeluwa of the Source, the social life of Olori Shilekunola Moronke Naomi Ogunwusi has nearly been zero. Despite her sultry look, she has remained down-to-earth and unexcited about sharing the spotlight with her super monarch hubby at many of those lavish parties featuring the crème de la crème of the Nigerian social establishment. Rather, she has been deeply engrossed in her evangelical mission, albeit with the support of her husband.

While the Olori shares similar characteristics with her predecessors, in terms of beauty, her spiritual background stands her out among other former wives of the Onirisa. But last weekend, she yielded a bit as she let down her hair and partied a little in Lagos. The Queen, stunning in her elegant accessorized white attire complete with a headgear that reveals her real beauty, was at the Lagos businessman, Dr. Babatope Agbeyo’s birthday party, at Ikeja. She mingled with the high and mighty that attended the party for some hours before leaving with her royal entourage to Abule Egba, a Lagos suburb for the birthday bash of popular socialite, Princess Toyin Kolade. At the party, she had the company of her sisters-in-law –Princess Folashade, Princess Adesola and Princess Bimpe—all elder sisters to the Ooni of Ife.

The young Olori, who turned 26 on April 16, has ever been a prophetess with a thriving ministry. She started ministering eight years ago at 18 as the Founder of En-heralds Ministry, a church based in Akure, the Ondo State capital.

See her in the video below.