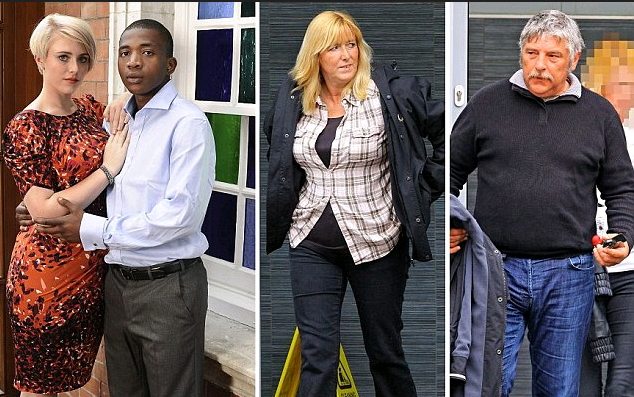 A UK-based racist parents, David and Frances Champion have been jailed for 12 months over brutal attack on their daughter and her new black boyfriend. naijagists.com

The Swansea-based couple lashed out on their 17-year old daughter named Jane when she was caught in an undress state with her waiter boyfriend Alfonce Ncube in their home.

We learnt Jane’s father Mr David Champion hurled all sorts of racist abuse at Ncube before kicking him out of their house.

The 50-year old father later pulled her daughter’s hair and pushed her out of the door.

According to a prosecutor, Nicola Powell

“David Champion asked his daughter if she was still seeing Mr Ncube. When she told him she was, he punched her in the face. Her father then grabbed her by her throat and continued hitting her.”

Here is what Jane’s mother, Frances Champion told her daughter

“You deserve it, it is all your fault.” She started hitting Jane, now 18, leaving her with swelling to her face and lumps on her head.

In another incident, the couple who hailed from Swansea stormed the restaurant where Ncube worked but he had gone into hiding.

David Champion was jailed for twelve months and his wife Frances Champion caged for 9 months after she admitted the racist attack.

“Your behaviour was disgraceful. We live in a liberal and enlightened society and these sorts of racist behaviour cannot be tolerated.” Judge Peter Heywood told the pair at Swansea Crown Court (daily mail uk)

This is not funny!

Why do people behave like this in this day an age?