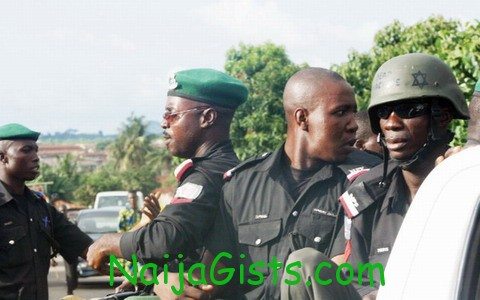 According to a recent report on Tribune titled “Tears, Wailing Greet Mass Transfer In Police.”, the security situation in Nigeria has worsen even grown men are crying foul over mass transfer to violate Boko Haram states.

It’s indeed a sad situation considering the fact that the dreaded Boko Haram sects are killing people like animals in the northern states while our security officials are equipped with less sophisticated weapon to do their jobs.

Read the detail report below

“It was wailing and yelling galore as the Police Management transferred over 50,000 policemen to different parts of the country, Saturday Tribune, has learnt.

An impeccable source said news about the postings started filtering to state commands on Thursday.

According to the source, over 5,000 inspectors and other ranks were moved from each state command and scattered to other commands.

It was gathered that the policemen, who were transferred from Delta State, were posted to Kano, Plateau, Borno and Yobe States.

Also, those transferred from northern states were posted to states like Benue, Enugu and Abia states.

It was gathered that some policemen had threatened to resign if the postings were not changed, while others resorted to spiritual help in order to be able to cope in their new areas.

The number of senior officers affected in the transfer was put at about 5,000 as compared to those of other ranks.

The source revealed that because of the determination of the top echelon of the police to confront security challenges in the country headlong, directed that nobody should be spared in the postings.

In the directive, the Inspector General, Mr M.D. Abubakar, said that no policeman should stay beyond two years in any command.

He also said because of the long stay of some policemen in a particular posting, they often indulged in some unlawful acts and connive with criminals.

The source added that more postings would be made in the next one or two weeks as the IGP had directed that the postings should be completed by the end of the second week of September.

Also, as the compilation for promotion of the other ranks commences in September, the IG has directed that any of those transferred to their new Commands and refused to move would not be considered in the promotion exercise.”

Nobody wan die so sad.