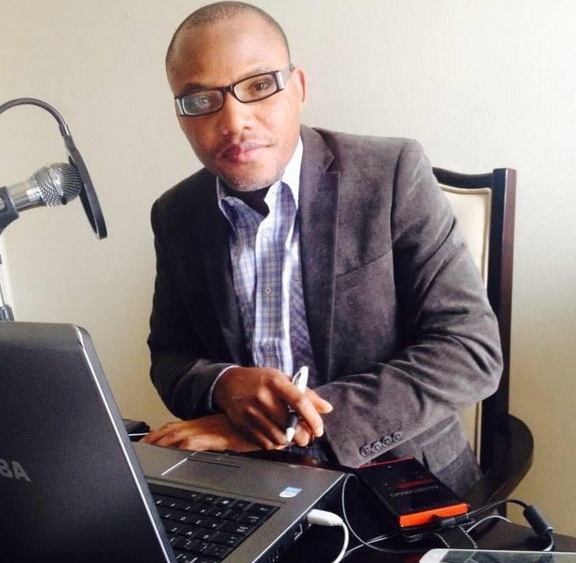 A major accomplice of rogue broadcaster Radio Biafra, an engineer based in Enugu has been apprehended by the Department of State Security operatives. The suspect as we exclusively gathered yesterday was being transported to Abuja as at Press time of filling this report.

It is believed that the Enugu-based accomplice assisted the main radio pirate in London by placing not so large equipment on abandoned NITEL transmission polls and a few transmitters owned by other mobile telecom providers.

This is even as the Director-General of the Nigerian Broadcasting Commission (NBC), Emeka Mba, in an exclusive chat with Daily Sun on the issue, said the satellite signals from the malicious station will be blocked from reaching Nigeria by the end of yesterday (Thursday).

The Permanent Secretary, Federal Ministry of Information, Shade Yemi-Esan, had on Wednesday told State House Correspondents after a meeting with President Muhammadu Buhari that NBC had successfully jammed the signals of station.

Mba, who declined comment on the arrest of the accomplice of the radio station which he said sent signals to Nigeria through a London-based content provider, however, noted that beyond jamming the signals, once it is discovered to have hacked into a Nigerian station, the commission was optimistic of completely cutting off its ability to broadcast in the country via satellite yesterday.

He denied the rumor that the commission was slow at clamping down on the station which he described as broadcasting nonsensical garbage. The NBC had to “catch the station in the act” before taking action.

He said: “When they were broadcasting on the internet it was not much an issue, until they started appropriating FM frequencies in various cities across the South East and it became for us an urgent national security matter. We had to trace them. They are using more sophisticated equipment and we had to upgrade our own equipment to track them. To be honest it was difficult dealing with them because they are on satellite and while we are able to neutralise the terrestrial frequencies on the FM band, satellite is very a different thing, and they are outside Nigeria where you have different protocols with how you deal with this issue. They also online and you know how difficult it is to deal with this kind of thing online.

“But then again they are as using what we call frequency agile transmitters through which they hop from one frequency to another. So once you block them in one frequency, they move to another. So what we have done is to upgrade our capacity to follow and block them where ever they are transmitting. To give you and instance, they were transmitting through 104.7 FM Enugu yesterday (Wednesday), they moved to 102.1 FM Enugu and we also jammed it. This is why it is more important for us to catch them than the process of jamming.

“I can assure everyone that these people will be caught and we will support the security agencies to ensure that they face the full wrath of the law. It is no longer a matter of running a pirate station. It is now a matter of subverting the state. There is a possibility of it becoming a matter of sedition as some of the content of the broadcast is declaring war on Nigeria. Our job at the NBC is to use our technical capacity to ensure that we are able to neutralise them wherever they crop up. I am confident that before the end of today we should be able to take them off satellite. This will deal a major blow to their ability to send signal to Nigeria from where they are based abroad.

[BY Kemi Yesufu, Abuja, The Sun]