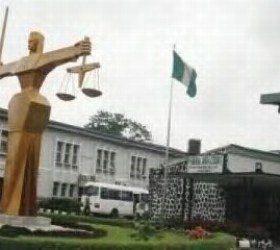 The wife of Pastor Victor Odafe, Blessing asked an Agege Grade A Customary Court in Lagos for a divorce. According to the Pastor’s wife, Victor was fond of watching pornographic movies and indulged in self-pleasuring a lot. naijagists.com

The mother of two who dragged her husband before the court vowed not to have anything to do with Victor whom she claimed always threatened her with physical injuries whenever they had misunderstanding.

Blessing told the court that she lost interest in the relationship when she found that her husband was irresponsible and also lacked care for her and their children.

”l always warned him to stop the bad habit, because it doesn’t portray him in good light as a minister of God”. She urged the court to dissolve the marriage and grant her custody of the children.

In his defence, Victor, who claims to be a pastor at Empowerment Church Oregun, Lagos, denied the allegations. According to him, he gave Blessing some money to join him in the church, only to return and discovered that she had gone with the children.

The husband added that he quickly informed her parents who told him that they were not aware of his wife’s decision to pack out of her matrimonial home. “I was amazed. I had to call my boss to intervene and he did, but Blessing proved stubborn”.

He claimed that he began to notice on their wedding day that his wife was aggressive and abusive. However, Victor blamed himself for encouraging his wife to abort a pregnancy, saying he did it out of ignorance. The husband also regretted beating his wife due to frustration he “experienced as an Okada rider”.

He added, “I had a good job when we were living in Nnewi, Anambra State, before relocating to Lagos, but, in order to make ends meet, l became an Okada rider and got frustrated by the day”.

Meanwhile, the court adjourned the case till November 5, 2012 for further hearing. It advised the couple to consider reconciliation and return to give progress report at the next adjournment date.(Vanguardngr)