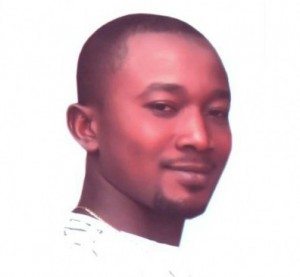 Oct 14, 2012 – Soldier Kills Peacemaker For Telling Him Not To Beat His Girlfriend

Emmanuel Papa Ebonyi dreamt of a great future. A future where he would pass his examinations in flying colours, have a great job and support his siblings who had always been there for him. Unfortunately, all these dreams were terminated when a soldier snuffed life out of him just because he tried to be a Good Samaritan.

His sister Felicia Samuel Ebonyi tells the story in tears. “The unfortunate incident happened in the early hours of 9th August (2012). On that day, my brother, a Higher National Diploma I (HND I) student of Nuhu Bamali Polytechnic, Zaria, Kaduna State met his untimely death in the hands of one Captain Olufela Doyin Erizia.”

Like so many other people, she just could not believe that it was true. So did it happen? you ask. “My brother was in the company of his friends and they visited Mate Bar Night Club, PZ Sabongari area of Zaria on the night of the previous day to celebrate the birthday of a friend. That was where he met Captain Olufela D. Erizia and his friends.”

Everything went well for a while. But suddenly there was a quarrel between Erizia and his girlfriend. Ebonyi intervened warning Erizia against fighting with his girlfriend. That unfortunately turned out to be a grievous offence in Erizia’s dictionary. Infuriated, he took the laws into his hands beating Ebonyi black and blue.

“He beat up my brother until he was half dead. Along the line his friends rescued him from the soldier and were trying to leave the premises in the vehicle in which they came, but he (Erizia) still chased them and was struggling with the driver of the vehicle. If Ebonyi had known the calamity that would befall him, he would not stop Erizia from fighting his girlfriend, but his sympathy for the womenfolk landed him in an unexpected grave.” Sadly, she continues her story: “When the incident happened, one of my brother’s friends called me on phone and asked me to come over. They took us to the barracks and I met another eye witness. It was not the soldier’s girlfriend, it was another girl. The girlfriend actually ran away and I have been trying to get her to come and tell her side of the story.”

What about her parents and the other siblings? How are they taking the news of her brother’s demise? “My parents are both late. I have four other siblings and they are all very sad about the development. He is the second to the last born in the family. We used to have an elder sister who died in 2007. She was ill and initially the ailment was diagnosed as typhoid. It was later discovered that it was hepatitis and her death was quite painful.”

Erizia was apprehended, taken for questioning and interrogations after which he was taken to the Area Command Police Station, Zaria. “However nothing has been heard ever since. We have been kept in the dark on this issue because not only did they refuse to hand over the man to the police authorities but also did not have courtesy to say a word. Sources at the barracks were even saying that he had been posted to another duty beat. It is on this basis that we are calling on the Military HQ, well-meaning Nigerians, human rights activists to see to this matter and make sure that Erizia is brought to book.”

According to Sadau Garba of the Kaduna Human Rights Association “The offence of the late Ebonyi was that he pleaded with Capt Erizia not to manhandle a lady he jerked up and molested. After mercilessly beating Ebonyi a friend, one Femi David, rushed him to Salama Hospital, Sabongari, Zaria and they directed that he should be taken to Shika Teaching Hospital due to the critical condition. It was on the way to Shika that Emmanuel gave up the ghost.”

He added that “the family members of the late Ebonyi have made several visits to the Kaduna State Police Command headquarters but the authorities of the Army Barracks Zaria, are not willing to release the said Captain Erizia to the police to investigate this inhuman, barbaric and dastardly act.”

We also spoke with DSP Aminu Lawal, the Police Public Relations Officer in Kaduna and he confirmed the case saying investigation was in progress.

He also said, “The authorities of the Nuhu Bamali Polytechnic, Zaria could not ascertain if Ebonyi was a student of the institution.”

How is the culprit going to be brought to book is what the Ebonyi family is asking.(The Nation Reports)

Randy Pastor Dragged To Court Over Sex Addiction
Presidency To Spend N654.02 Million On Generators In 2013