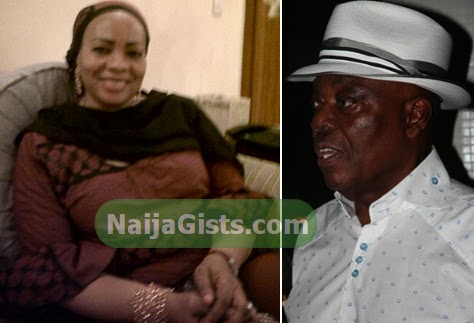 According to insiders, the couple’s grown children initiated the reconciliatory move. However, it does not entail the two of them coming back again.

It will be recalled that the marriage between Okoya and Ajoke crashed in 2001. The events leading to the crash were so messy that they parted on a very bitter note. The union came to an abrupt end when the billionaire industrialist allegedly accused Ajoke of infidelity. It was shortly after Ajoke moved out of their then Ikoyi Crescent residence that Okoya threw a big punch across her way, denying the paternity of their last child, Rasheed. Eventually, a DNA report from London proved him wrong. Even before the DNA was conducted, most people within the society had insisted that even a blind man could attest to the fact that Rasheed was Okoya’s son, because the resemblance between the two of them was very uncanny.

It was learnt that after she moved out of her matrimonial home, Ajoke relocated to Abuja, where she lived for some years. It was during this period that she met and married a Minna, Niger State born businessman. However, after her second marriage, the 55-year old society lady tried, assiduously, to keep a low-profile lifestyle. Ajoke and her second husband lived in Abuja, where they had a beautiful home in Maitama District.

They jointly ran various business ventures, chief among which was a massive bakery company. Her husband was said to love her to bits. He also extended this feeling of love to her five children, Bimbola, Idris, Tokunbo, Sinmisola and Rasheed.
However, it was gathered that none of Ajoke’s five children supported her decision to marry another man. This later turned out to be a great source of concern for her.  Every attempt she made at making her children to accept her husband turned out to be futile. The situation took a very downward turn when Ajoke’s grown up children refused to visit her in her matrimonial home whenever they came home on vacation.

Just when Ajoke was trying to come to terms with the painful reality that her children would never support her marriage, she got a rude shock when she learnt that her husband had another young wife. She was said to have felt betrayed by what her husband did to her. It was at this point that Ajoke decided to pack up the marriage. She moved out of her matrimonial home and bought a house in one of the posh areas in Abuja. It was gathered that Ajoke doesn’t nurse any regret about her decision. To her, no sacrifice is too big to be made for her children’s love and happiness.