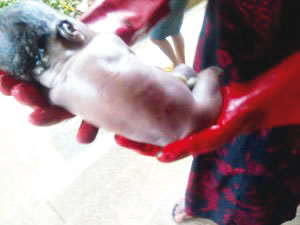 Baby from a similar case

A 20-year-old woman, Rafiat Oseni, has been brought before an Ebute-Meta Magistrate’s court for allegedly killing her day-old baby by flushing him down a public toilet.

It was learnt that Oseni, who hails from one of the Northern states in the country, worked as a sales girl in the market and had entered the toilet pretending to ease herself.

She was said to have forced the baby into the toilet, but the baby got stuck in it.

He died as people were attempting to rescue him.

The magistrate, Mr Olanrewaju Olatunji, in obvious shock, asked the suspect why she decided to kill her own child.

Instead of responding, Oseni burst into tears and pleaded for forgiveness.

She said, “Oseni went to the public toilet on January 3, 2014 around 2.30pm. She was said to have pretended that she wanted to ease herself.

“She came out and nobody suspected anything. When she left, the baby started crying. It was another woman who wanted to use the toilet that first saw the child and called the attention of the woman in charge of the public toilet.

“People went there and saw that the baby was stuck inside the toilet. By the time they removed him, they saw that he was already dead.”

Uket said the suspect could not be found on the day of the incident, but she was caught the following day when she showed up again in the market for work.

She was subsequently handed over to the police who arraigned her on Wednesday on one count of murder.

The charge reads,  “That you,  Rafiat Oseni, on January 3, 2014, at about 2.30pm at Alaba Rago Market Ojo, Lagos, in the Lagos Magisterial District, did unlawfully kill a day-old baby and thereby committed an offence punishable under Section 221 of the Criminal Law of Lagos State,  Nigeria,  2011.”

The defendant’s plea was not taken.

The police prosecutor, Inspector Richard Odigwe asked for the remand of the defendant in line with Section 264 of the Administration of Criminal Justice, Lagos State Nigeria, 2011.

Odige added that the remand would help the police obtain legal advice from the Directorate of Public Prosecution.

The magistrate agreed to remand the defendant in the Ikoyi Prison pending legal advice.