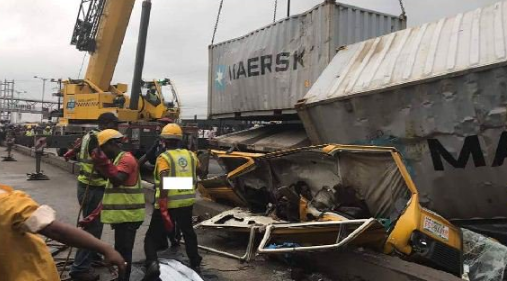 A Pastor under RCCG Province 8 in Lagos, Charles Ito and his wife died yesterday when two containers crushed their mini bus on their way back from the Redemption camp.

The driver of the truck reportedly fled the scene as soon as he saw the dismembered body parts of the deceased on the floor while his conducted was apprehended.

The incident happened by the BRT terminal on the Lagos /Ikorodu road, Ojota.

Videos: How IPOB Leader Kanu Changed From A Unity Advocate To Division Preacher In 4 Years
Lagos Police: We Moved Evans The Kidnapper To A Maximum Security Cell In Abuja For His Protection