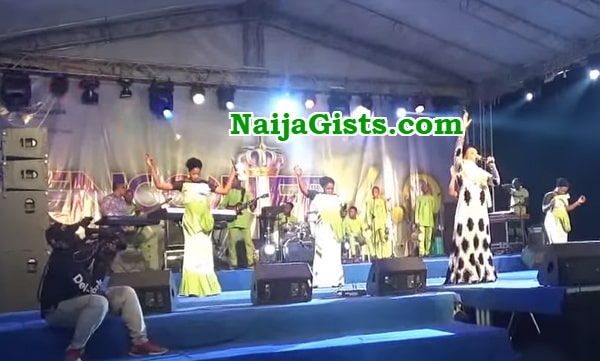 At least 20,000 people participated in Season Three of the annual Praise Concert programme organised by The Redeemed Christian Church of God (RCCG), Lagos Provence 58 in Ikorodu, Lagos, on Easter Sunday.

Also in attendance were royal fathers and ministers of the gospel from the area, among others.

They sang and danced to the music of gospel artiste, Mike Abdul, a member of the Midnight Crew.

Provincial Pastor, Godwin Obadan, noted that those who attended the event had increased from 6,000 in Season 1, to over 20,000 in Season Three.

“Season one, to the glory of God, had over 6,000 worshipers in attendance; Season two had 12,000 people in attendance. The projection for this year is 20,000. The purpose of the event is to open the heavens over Ijede-Ikorodu and its environs, and win souls while praising God,” the clergyman said.

Pastor Obadan added that over 500 lives were saved in previous editions of the programme.

He said: “This is the first edition since Ikorodu got a region, and the impact the creation has had has been no small feat and, as seen in this year’s edition, has even had a positive impact on the programme. The synergy created by the region has been cascaded to the programme.”

Regional Pastor, Nat Adejuwon, who led the prayer session, said he was dazed by the crowd at the event.

“People love music; everybody likes music, and music is the food of love. If it is so, let’s play on. We have the presence of God, the Holy Spirit, then singing; these are the things people look for; people love happiness,” Pastor Adejuwon said.

He praised Province 58 for organising the event and promised to support the ‘project’. He also encouraged the seven other provinces under his region to emulate “the wonderful work being done by Province 58.”

Member of the Midnight Crew, Abdul said it was his first time at the Praise Encounter and that it was exciting being in the presence and people of God.

“We would ask God for his presence if we are opportune to be here next year and the Holy Spirit will do new things in the life of the people. God will do more than what we just experienced tonight,” the singer said.

RCCG Assistant General Overseer, administration and personnel, Pastor Johnson Odeshola, who was the guest speaker, took his sermon from the book of First Corinthians, 15, 12 and 2.

He admonished the people on ‘hope’, noting that Jesus Christ was the hope of humankind.

The preacher said he was surprised at the size of the crowd at the concert and that if it continued that way, the organisers would need a bigger venue.

The all-night event was still on till 5:30 a.m., with participants dancing to gospel songs and ministration. There were also deliverance, testimonies and confession sessions.

Some of the youth told Southwest Report that they were looking forward to next year’s edition.