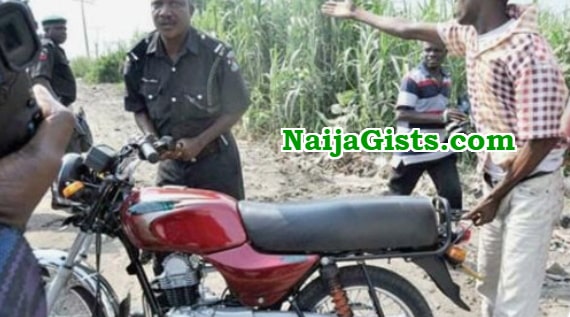 Dacha Ibrahim, a Police inspector attached to the border patrol in Lagos has been arrested for allegedly stealing a Bajaj motorcycle at Oke Ogbe axis of the Lagos-Badagry Expressway.

Ibrahim, who is said to be undergoing orderly room trial at the Provost Section of the Lagos State Command, Ikeja, was said to have been arrested on April 25 and the stolen motorcycle recovered from his house.

It was gathered that on March 29, four robbery suspects, Lawal, Tosin, Aderintan and wasiu, allegedly conspired and robbed the said Bajaj motorcycle belonging to Emmanuel Nonye Godwin, a resident of Oke –Egbe community. Two of the robbers were arrested by vigilant residents and the stolen motorcycle recovered from them.

One of the residents, Mr Afolabi , an automobile mechanic, said that it was in the course of questioning the suspected robbers that Inspector Ibrahim drove to the crime scene In his Honda ‘Baby boy’ car and identified himself as a police Inspector.

The Inspector volunteered to carry both suspects and those that apprehended them to Morogbo Police Division for proper investigation.

However, on the way to the police station, Ibrahim allegedly discharged those that apprehended the robbers and gave them N500 each as transport fare to return to their homes, promising to take the robbers to the station.

Tunde further alleged that the Inspector drove off with the robbers to an unknown location where he released them and took the motorcycle to his house for personal use.

Luck ran out on him when Sesinu, who discovered that the case was not reported at the police station, insisted on recovering the motorcycle and during the search, one of the escapee robbers, Adesina, was rearrested and taken to the police station on the directive of ACP Okafor, the Area Commander. In Adesina’ s confessional statement to the police, he was said to have narrated how Ibrahim freed them and took away the stolen motorcycle.