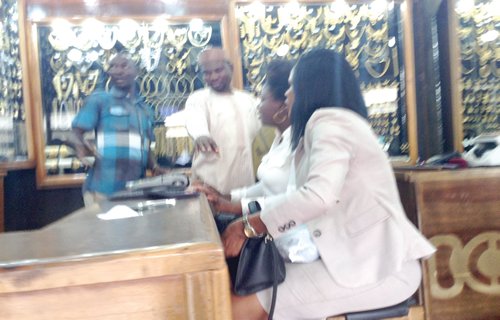 The current recession is biting harder by the day and it’s affecting symbols of many unions.

At first it looked like fable from one of the Nollywood series until the reporter’s interaction with some of them revealed the unimaginable true story. But the truth is that the level of hardship in the country has reached an alarming rate. Who will ever think of a couple who are barely six months old in marriage letting go of their precious symbol and reminder of their marital vow just to meet up with their needs? While some are in this act because it is the only available means left for them to survive, others are selling it because of increase in value of the dollar (foreign exchange) which invariably boosts the price of foreign made wears.

Wedding rings are a symbol of faithfulness and everlasting love between a husband and his wife. It is meant to be a lasting reminder of your special wedding day but the reverse seems to be the case now as couples desirous of surviving the recession now take to selling these otherwise life time souvenirs. A woman in her early 40s who simply identified herself as Gloria said she is not happy selling her wedding band but after discussing and analysing the situation with her husband, they have to sell it in order to pay the children’s school fees and attend to other needs.

“You and I know that it is strange for a woman to sell her wedding ring no matter what but that is the only thing I can count on for now and after discussing with my husband, he understood the situation and gave me his consent. My marriage is just 11 years old but I have to take this ugly decision to save my children (tears rolling her cheeks) from the unbearable ugly situation facing us.

My husband was sacked from a construction company last year and we have been managing to survive since then, I have sold many of my valuables to cater for our feeding and I have to sell my wedding ring,” she told Inside Abuja. When Inside Abuja inquired to know how much she will make from it, Gloria said: “It weighed 3.6 carat at 14000 per carat so everything is N64,400. I only need N40,000 to balance up my children’s school fees even my friend that promised to borrow me the money changed her mind for the fear that I will not be able to repay.”

Similar to Gloria’s condition is that of Mrs. Ene Ocheme, a business woman from Benue State.

Ocheme took to selling her wedding band just five months after her wedding. Her words: “My mission in Abuja is to sell my golden wedding band to start up a business. My husband lost his job and life has not been easy ever since he lost his job. We have been praying and believing God that he secure another job.

I am a graduate too, but I have no job. So, I decided to drop my ego and start up a business no matter how little because it is really embarrassing when I see my husband asking people to borrow him money and they disappoint him at the end of the day. The one that even made me to take this ugly decision is that he was invited for a job interview but he didn’t go for the interview because we couldn’t source for transportation fare from Makurdi to Lagos.”

Ocheme added that her husband is not aware of her decision to sell her wedding band. She, however, assures that the husband will not be too angry with her if he eventually find out because she intends to do something big and better with the money realised from the sale. “When I told my husband that we should sell our wedding band he said no because the marriage is too young for that but I will be able to calm him with the outcome of my business.

I will also make him understand that the ring has to go for our marriage to stand because my parents were sceptical of his ability to take care of me. So, I feel it’s too early for me to start complaining to my parents. I believe everything is going to be fine and I will get a better wedding band and take it to the priest for blessing.”

While Gloria and Ocheme sold their wedding band to meet up with critical urgent needs, Halima Isah, a beautiful young woman from Minna, Niger State said she is selling her wedding band now that FOREX is high so that she can make profit from it.

“What is the big deal in selling wedding band? Even if I don’t sell I will still change it for another one so I don’t think it makes any difference. I wedded in 2009 and then one gram of gold was sold for N7,500 and now a gram is N14,000. It will be stupid of me to keep the band and allow exchange rate to drop because the price will drop as soon as dollar drops,” Isah said. Inside Abuja’s meeting with Mr. Uzo, an Abuja-based business man in the company of his wife at Wuse gold market confirmed that both couple agreed to sell their band in order to make profit.

“My wife and I are here to sell our gold wedding ring so that we can add the money to our business. It is just like selling your car when you are in need of money moreover the price has really appreciated. So, we are not loosing anything. We will get another one when the price drops until then, we will get GL ring which is also durable,” he told our correspondent.