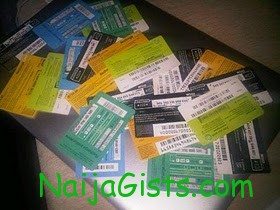 The victim, simply called Benjamin, had gone to demand for the balance of the money the guard was owing him for the recharge cards the deceased sold to him when the incident happened.

The incident occurred at about 9 am at 273B, Corporation Drive, Dolphin Estate, Ikoyi, Lagos. naijagists.com

According to eyewitnesses at the scene of the incident , the guard identified as Onuabuchi John, allegedly stabbed the victim in five places on the head and face when the victim who has been supplying him recharge cards came to demand for the balance of N24,000 Onuabuchi was owing him.

The guard, it was learnt, engaged the victim in an argument which soon degenerated to a fight during which he went inside his security post, brought out a kitchen knife and stabbed the victim several times.

The victim slumped and died on the spot.

The guard, it was further gathered, after killing the victim, dragged the corpse underneath the staircase of the office complex.

He covered the corpse with a rug and subsequently stabbed himself to look as if it was a robbery incident.

Nemesis, however, caught up with him when his employer’s shop assistant saw him as he made to escape from the compound the victim’s bag.

She was said to have raised an alarm which attracted neighbours who pursued and caught up with him.

The police at Dolphin Police Station and the DPO SP J. S. Musa were invited. He led his team to the scene of the incident and arrested the suspect.

Items recovered from the suspect, according to a police source, include a kitchen knife and the bag of the victim, containing recharge cards worth thousands of naira and unspecified amount of money.

During preliminary interrogation, the suspect allegedly confessed to the police of stabbing the victim to death for disturbing him about the N24,000 he was owing him.

“I am from Ebonyi State, a private security guard. The victim Benjamin has been supplying me recharge cards for some months now. I have been faithful in paying him his money without any misunderstanding.

“On the day of the incident, the victim came to demand for the balance of his money and I told him to come back, but instead he started shouting in the compound and a fight broke out.

“In the process, I didn’t know what came over me and I picked a knife and stabbed him till he died.

“I regret my action and I promise not to listen to the voice of the devil in my life if I am set free in this case,” he pleaded.

At the arrival of news cast, the gate of the building was padlocked and at the Dolphin Police Division, the DPO was not available for comments. He was said to have gone to Ikeja Police Command.

A police source confirmed the incident and said the corpse of the deceased has been deposited in a morgue, while the suspect has also been transferred to the State CID, Panti, Yaba, for interrogation.

When we visited the State CID Command, the presence of the suspect was also confirmed by the police.

All efforts made to see the family of the deceased proved futile.(pm news)