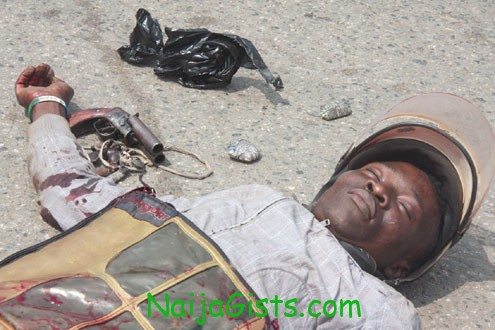 The police in Lagos State, Southwest Nigeria, have arrested two suspected commercial motorcycle (okada) robbers who invaded a shop at Aguda area of Surulere at the weekend. naijagists.com

One of the suspects, who rode the motorcycle, escaped when the police swooped on them.

A gun was recovered from the suspects who were arrested.

The incident took place on Friday when the three men allegedly stormed the shop located at Lateef Erelu Street, Aguda to rob in broad daylight.

Residents in the area were said to have alerted officers of the Rapid Response Squad, RRS, who promptly stormed the area and shot two of the robbers after little resistance and brought them to the RRS Headquarters at Alausa, Ikeja, Lagos.

A police source told journalists that the police acted on a tip-off, saying that one of the suspects escaped when he saw the RRS team.

The police source said the team of RRS was patrolling the area when a call came to them that a robbery operation was going on at Lateef Erelu Street and that the team swung into action and got to the scene on time to arrest the suspects.

The names of the suspected robbers were given as Tiamiyu Fatai Opeyemi, 33, from Abeokuta, Ogun State and Lateef Ajibade.

The suspects were bleeding profusely when P.M.NEWS visited the RRS office as they were kept in the Toyota Hilux van of the police.

One of the suspected robbers, Opeyemi told P.M.NEWS that he had been involved in armed robbery for four years and had dispossessed people of their wares.

As at the time of filing this report, it is doubtful if Opeyemi will survive as he had lost much blood through severe bleeding from the gun shot injuries he and the other suspect sustained during the gun duel with the police.