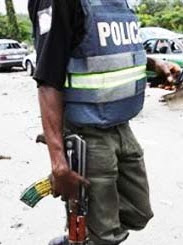 A policeman who served the Nigerian Police Force all his life has killed himself months after he retired from Anambra State Police Command.

According to close sources, Itam Obongha who retired as an assistant superintendent of Police in Anambra back in April travelled to his family house on the 1st of November 2017 and took his own life at his father’s compound in Mkpani area of Cross River state on the 3rd of November 2017.

Another source close to the deceased said since his salary was stopped in April, he hasn’t being paid his entitlements.

He reportedly took his own life out of frustration.

Funke Akindele Bello In London To Deliver Her Twins Or Triplets – Fan
Riot As JTF, Immigration Officer Kills Taxi Driver In Abuja While Eating In His Car [VIDEO & PHOTOS]