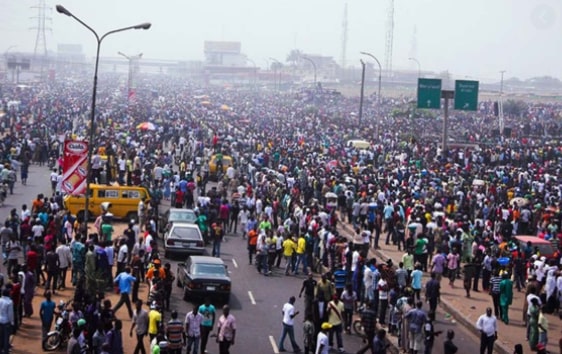 Why a revolution will never happen in Nigeria

an article by Tony Ogunlowo

We saw how the revolution led by the late Jerry Rawlings in the early eighties cleaned up Ghana and made it the promising nation it is today; we all saw how the Arab Spring Revolution of 2010 brought sweeping changes to the Middle Eastern countries and people are wondering when there will be a revolution in Nigeria to change things for the better.

The stark – and sad – truth is that there will never be a revolution in Nigeria.

The reason ? the lack of unity in the face of adversity or a lack of a uniformed voice.

For a revolution to work everybody – the Northerners, the Southerners, the Rich and Poor, the young and old – all have to come together as ONE to demand change.

This can’t happen in Nigeria: the recent #ENDSARS protests has shown that while others were out on the streets, protesting, a great many sat down at home, unconcerned, while the rich and elite just doubled the guards on their private estates or flew abroad on holiday. As a result the ruling government knew that after shouting and protesting for a few days, without the movement gaining any momentum, the people will quietly go back to their homes and usual lives – especially after the army/police might have shot a few people! In France, for instance, when the French go on to the streets to protest nobody goes home until the government bows to their demands and this can take weeks or even months, paralyzing the country.

The stumbling block to any kind of revolutionary change in Nigeria is simply – MONEY! The wealthy Nigerian elite, who are like a cabal, and stand to lose everything they have if there’s a revolution have the financial clout to suppress any kind of uprising, with the police, military and security services in their pockets. On top of that they are most likely going to pay off any would-be revolution leader. How many would –be revolutionaries , in recent times, have suddenly gone ‘quiet’ because they have been ‘settled’ with bags and bags of ‘Ghana-Must-Go’ filled with money? In a country like Nigeria where nobody is patriotic ( – but yet again who wants to die for Nigeria?) everybody has a price: pay it and you buy their loyalty.

Even our great political fore fathers who put their lives on the lines so that Nigeria could exist would think twice if they had to do it today: would they fight so that a two-bit thief can become a governor and loot his state dry?

If there is a Revolution and it succeeds what is the guarantee that the new leaders won’t do an ‘Animal Farm’ and become worse than their predecessors, interested in only lining their own pockets with stolen money at the expense of the masses?

The sad truth about Nigeria is that nobody really wants change. What is really annoying everybody is that the MONEY is not filtering down to the grassroots and only the ‘Ogas at the top’ are chopping : let the money filter down and nobody would care if a dictator worse than Abacha ruled the country!

For a change to happen ( – I won’t call it a ‘revolution’) everybody’s mind-set needs to change. Our mind-set needs to change  from thinking about how much money we can make out of the system, legally or illegally, to how much we can save or put back. Fight corruption first( – and jail the embezzling looters!) and there will be enough money in the system to pay for the basics in life – proper education, decent healthcare and affordable food and fuel. Do this and the people will be happy.

The eradication of corruption first( – which is virtually impossible) will lead to a more governable Nigeria without the need for a revolution.