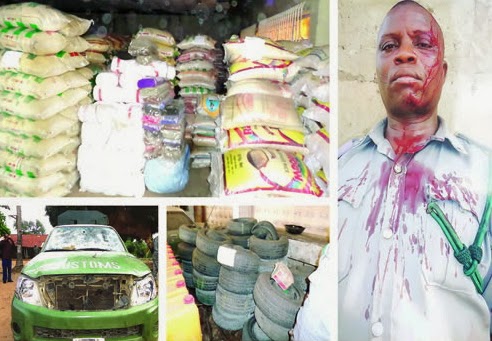 Two persons reportedly died during the incident while two others who sustained injuries are currently receiving treatment at an undisclosed hospital in the area.

According to an eye witness who identified himself as Obi Peter, the Customs men chased the smugglers to Sango motor park and seized one lorry load of second hand clothes and 10 cars loaded with rice.

He said after the seizure, the smugglers blocked the road to prevent the customs from taking away the seized goods and vehicles.

Peter further stated that in an attempt to force the smugglers out of the road, the Customs started shooting and in the process a 27-year-old Kogi indigene identified as Angela Abba who was preparing food in front of her shop was hit by a stray bullet on her head and she died on the way to hospital.

Three other persons who sustained injuries were rushed to the hospital and one of them died at the hospital.