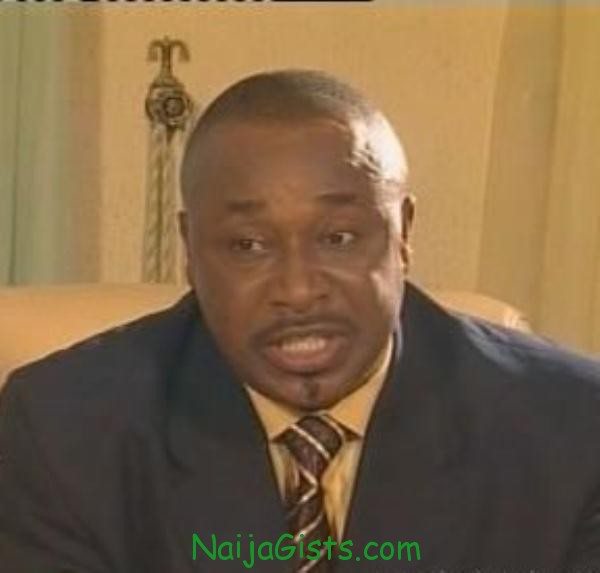 Nigerian actor Rich Oganiru who was accused of killing his wife in Abuja few days ago has opened up. naijagists.com

In an interview with High Society magazine, he said the accusation is false.

According High Society magazine report, Oganiru’s wife battled fibroid for over 5 months before she died.

He explained that they opted for some kind of treatment supervised by German doctors which will prevent normal surgery. But to his dismay, the fibroid kept growing back and causing his wife more pain.

Later, they decided to go spiritual and moved from Abuja to Prophet TB Joshua’s synagogue in Ikotun where the prophet gave them emergency appointment based on his personal recognition.

His wife, he said, then suggested they move to her brother’s apartment at the Airforce Barracks in shasha. While there, she rejected all the provisions that the actor bought and insisted on having pap prepared by her sister at her brother, Group captain David Aluko’s home.

After the meal, he said her condition became worse and they decide to move her to Synagogue since the appointment was a few hours from then. Oganiru said his wife refused and told him to take her to the hospital, this he did with the aid of her brother Group captain David. But at the military hospital gate, the woman died.

That according to him was when the problem started as the brother became hostile despite his condition which resulted in his being medicated as the shock of the death of his beloved wife raised his blood pressure. Later when he came to, he discovered that his Air-force brother in-law had deposited his wife’s body at the morgue and ordered him, Oganiru to go tell their parents that his sister was dead.

This the actor said he will do, but demanded the death certificate so as to present to his in-laws to clear himself since the Air-force officer had started insinuating all sorts. Group Captain David he said ordered him out of the barracks and he left to his hotel room where he discovered his wife’s stuff had been removed and his belongings searched and scattered.

According to Oganiru: “They even seized the keys to my jeep and my international passport. I had to beg for my things to be returned. When I got the keys and my passport back and David insisted that I cannot have the morgue tag for my wife, I left for our home in Abuja.

On arriving there, they had locked me out and carted away everything that belonged to my wife and even our wedding pictures. Eventually I was allowed inside.

Three days later some policemen from force headquarters came to arrest me based on a petition written about me that I killed my wife. I was kept in cell with Boko Haram members and I was the one washing for them. The police didn’t care about my medication.

When they saw my health was getting bad, they released me. I was asked to report two days later to face my accusers. I took some journalist to the house to see how they vandalized my things. That same evening, a group of policemen came in commando style, broke down my window and said I was under arrest.

That was how they took me to Asokoro police station after beating me mercilessly and I was bleeding from ear and nose, A few day later, a professor friend came and told them that they should release me or charge me.

He insisted that they should do the autopsy and charge me based on that. When nothing was found after the autopsy was conducted, they let me go.

Meanwhile these heartless people have gone ahead to bury my wife without my consent. Now the next thing is that they are on the internet alleging that I poisoned my rich wife for her property.

Let me tell you, my wife was a hardworking woman but about being rich, i don’t know, otherwise why did we scrape to the bone to find money for her
treatment? We live in a rented apartment, so i don’t know the property I killed her for that I wanted to inherit.

See, the callous people said I also killed my two former wives. My ex wife is alive, healthy and bubbling with my two children. But I know there is God and I must fight this to a logical conclusion.

God is with me and my accusers will soon be put to shame. Thank you for calling me to find out the truth.”

Thanks And God Bless

Continue Reading
You may also like...
Related Topics:confession, high society, how wife died, interview, Magazine, rich oganiru, side of story