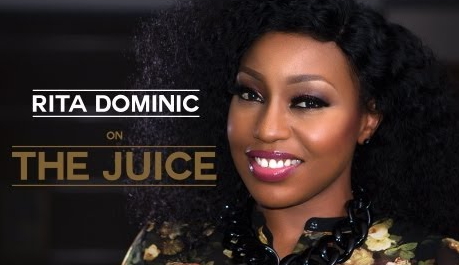 Sept 6, 2013 – Rita Dominic Flaunts Engagement Ring “I’m Getting Married To The Husband Of My Dreams”

Believe it or not Nollywood beauty queen Rita Dominic might be getting married soon.

The winner of the best actress of the year award at NEA 2013 in New York recently grant an in-depth interview on Ndani TV.

Rita who secretly suffered an heart break in her last relationship gave Toolz an hint about her romance life.

The actress also claimed she is a shy person and has suffered two major heartbreaks.

According to sources, Rita Dominic is taking her time with men in order to avoid another heartbreak.

Watch the interview video below;

Rita Dominic On The Juice

Rita Dominic is looking fabulous at 38.

Toolz is a professional amebo. See the way she is questioning that shy lady.