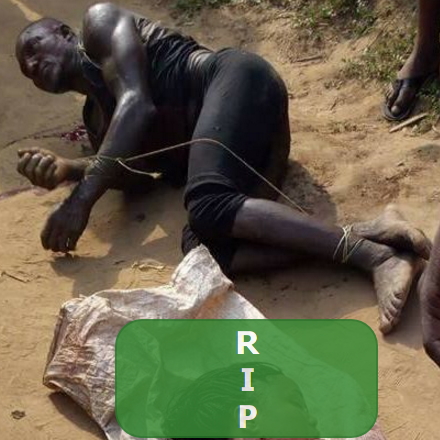 According to eyewitnesses, the man whose name is yet to be disclosed was seen carrying a sack with blood dripping from it at Muwo area of Badagry yesterday.

When people challenged him, he told them he was returning from a hunting trip.

This is what an eyewitness, Mr Solomon Adube said about the strange discovery today:

“The man was seen carrying a bag with blood dripping from it but when he was asked what was in the bag, he claimed it was bush meat, saying he had just finished hunting.

“The people insisted on seeing the bush meat but he didn’t oblige, so we suspected foul play and the bag was collected from him.

“Upon searching the bag, a head and two hands of a lady was seen in the bag and that was how people descended on him,’’ he said.

“The timely intervention of policemen from the Area K Command, Morogbo saved the suspect from being lynched by angry mob’’.

Investigation is ongoing to ascertain the identity of the victim as police transferred the suspect to SCID Panti Yaba.