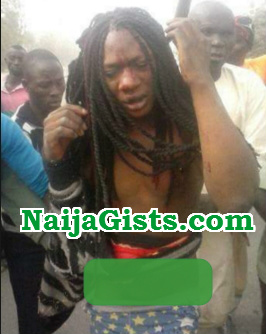 The child thief suspected to be a ritualist, was said to have dressed himself like a woman, covering his head with a wig and pretending to be deaf and dumb‎.

An eyewitnesses who gave her name as Evelyn said she is a neighbour to the mother of the victim at the market. She explained that the suspect lured the little boy named Godwin, with biscuit when his mother, Mrs. Edith Elawure, who sells second hand clothes was busy attending to customers at the market.

It was gathered that the suspect who strapped the baby on his back had escaped to one of the bus terminals in the area, where he was eventually found by a search team made up of traders.

The bubble however bursted on him when the angry mob descended on him and the wig on his head dropped off, exposing his real identity.

Men of the Oba market (Central) Police Division rescued the suspect from the angry traders who demanded that jungle judgement be meted on him.

The state police command spokesman, DSP. Abiodun Osifo, who confirmed the report, said the suspect was already been interrogated at the command headquarters.