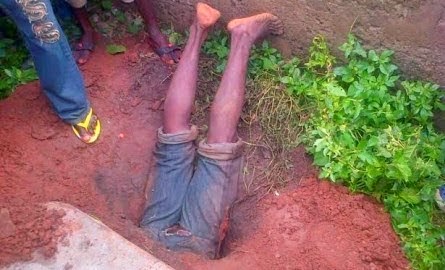 May 17, 2014 – Ritualist Killed By Dead Woman’s Spirit While Digging Grave To Steal Her Skull In Irepodun, Osun State

A young ritual killer who allegedly used an aged woman for ritual has met his waterloo in Osogbo, Osun state Nigeria.

According to residents, the suspected ritualist was fingered as the one who contributed to the untimely death of the old woman five years ago. He was also present at her burial. 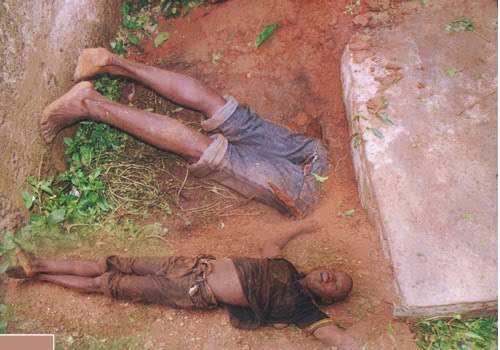 A family source to the late woman said the man went there on the order of a native doctor to bring her skull in order to use it as a form of ritual sacrifice.

To cut the long story short, he had cut opened the grave by the side and while he was trying to cut the woman’s skull, the body got trapped mysteriously inside the grave and he eventually gave up the ghost. 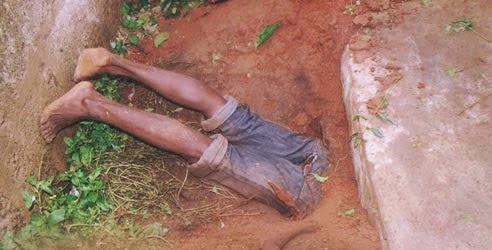 A close examination of his posture in the above picture revealed that he must have been struggling to get out before life was snuffed out of him by the woman’s spirit.

His accomplices allegedly fled when they noticed the situation ‘s out of their control.

The tragedy happened at Ilobu community in Irepodun LGA of Osun state in the early hours of Wednesday the 14th of May 2014.

An hawker of ogi who saw the body around 6:30 raised an alarm.

Osogbo police officials have removed his body and deposited it at Ladoke Akintola University Teaching Hospital, LAUTECH morgue in the capital city of Osun state.