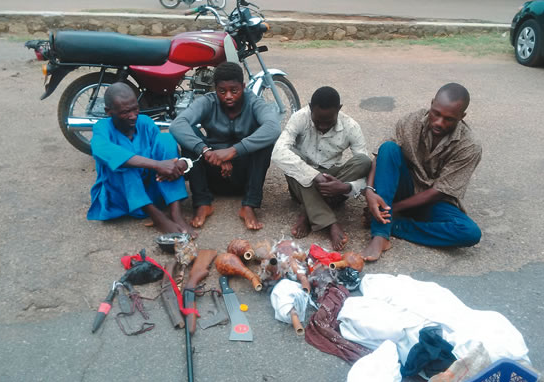 March 25, 2017 – Ritualists Arrested For Killing Trader In Kwara State & Using His Heart For Money Ritual Confess To Police In Ibadan

The 4 men pictured above were paraded at the Police Command Headquarter in Eleyele Ibadan yesterday for allegedly killing a cashew trader and using his heart for money ritual.

Before his death, the victim was said to be discussing a N10million business deal with a cashew trader, Olayinka Babalade who is the brother of one of the suspects.

When the suspects heard about it,  they laid an ambush for him. On the 24th of February 2017, the suspects lured their victim to a cashew farm in Ajase-Ipo, Kwara State where they shot him and cut his head and wrists for ritual.

The suspects even went as far as removing the heart of their victim.

When the victim didn’t return home, his wife reported him missing at Atiba Police station in Oyo where investigation led to the arrest of the suspects.

Here is the confession of the principal suspect, Babalade Gbenga.