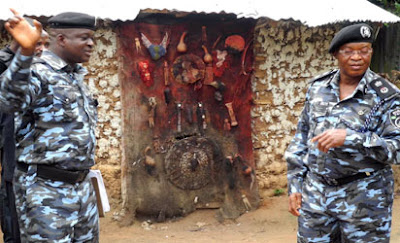 Within a week of a shocking discovery of a fraudster and ritualists den in Ogun State Nigeria, another ritualists’ den has been uncovered in Ogun State, southwest Nigeria, and two persons have been arrested in connection with the discovery, the police said.

The shrine is located at Iganke village, along the Ijebu Ode- Itoikin- Ikorodu road and was uncovered by men of the Ogun State Police Command after a tipoff by local residents, the police said.

The state Commissioner of Police, Mr. Ikemefunna Okoye, who inspected the den on Tuesday, said his men had been searching for shrines and other places where evil acts are perpetrated across the state.

He confirmed that two persons had been arrested.

“One of them tried to dupe someone of huge amount of money but through intelligence gathering, we got to hear about it. We immediately swung into action and we were able to arrest two of the syndicates that brought us to this place (the shrine) where they do all sorts of shady things such as rituals and frauds.

“Our investigation department is working tirelessly to get to know more about the activities of these people and take necessary action and the arrested suspects would be charged to court as soon as investigation into the matter is concluded,” Okoye said.

The police boss called on residents to cooperate with the police and promised that their identities will always be protected.

“I can assure you that the identity of anyone who volunteers information that will help us uncover men of the underworld will be highly shielded,” he said.