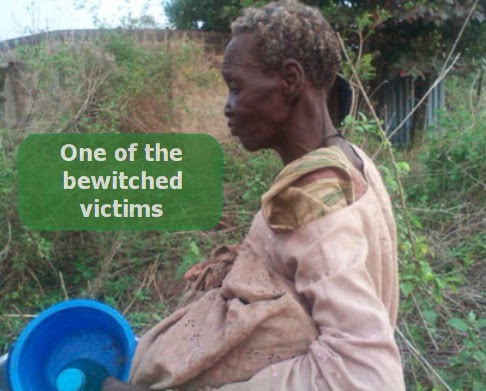 About 20 corpses were discovered in the den. Also 18 men and five women believed to have been been bewitched and bound with fetters in the dungeon, were found and rescued.

The rescued victims looked emaciated. One of the women was said to have been delivered of a baby who was sold to a waiting buyer among those who always thronged the secluded area at night to buy human parts.

Some of the captives were too weak to tell their stories.
It was gathered that some Fulani cattle rearers grazed their cattle in the bush around the area.

A suspect identified as Akeem Isiaka (38) was arrested in connection with the incident and taken to Sanyo Police Station.

Containers and wells containing human parts including skulls were also discovered in the bush.

A woman, Titi Adeniyi, who managed to speak, said she had been held captive for more than two years. Another captive, Tunji Alabi, who said he was a bus conductor before he became a victim of the ritualists, could not say much.

Oyo State Police Command PRO, SP Olabisi Clet-Ilobanafor, said some arrests had been made over the discoveries. [Vanguard]