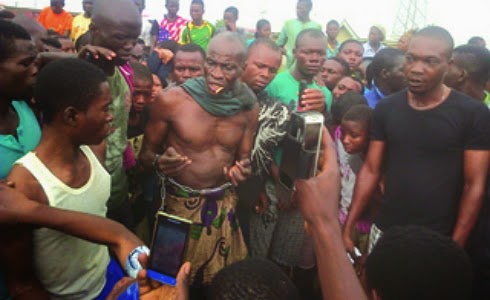 “The Church Owner Is Using My Blood For Ritual, He Asked Me To Bring 2 Children As Replacement” – A suspect confesses

A ritualists hideout has been found in Majidun area of Ikorodu Lagos.

The den is located in the remote area of Ikorodu. Hostages bound with chains inside the den include children and adults.

The bubble burst when a lady was arrested today with 2 children inside a Ghana must-go sack by vigilant residents of Majidun.The children, four years old were found alive and tied with a rope.

Before the lady was handed over to the police, she allegedly confessed to the residents that her blood was being used by the owner of the church for ritual and was asked to bring the two children for replacement.

According to residents who spoke with our correspondents, the pastor of the church, simply identified as Pastor Okonkwo, fled when he learnt that the lady was arrested, while some church members found within the vicinity denied knowledge of the ritualist’s den.

Residents of the area said that the church holds its services on Tuesdays, adding that members were mostly women.

A 53-year old man, Onwurah Nwankwo, was found inside the den of the ritualists. His hands and legs were chained.

The victim, Nwankwo said he had been in the den for 11 years after he was taken there by his wife.

”I am from Delta State. I am a trader and I have also worked as a truck driver. My wife handed me over to kidnappers and I was brought here. My hands and legs were chained. People have been made to believe that I was insane. I don’t know where to go from here because I am confused, “ he said after he was rescued from the enclave.

The Pastor of the Holy Family church that allegedly operated the ritualists den before it was uncovered today has fled the area to evade arrest.

Angry youths stormed the church in order to destroy it before 15 trucks loaded with policemen arrived the scene.

The Police officers used teargas to disperse the youths and curious crowd who stormed the area.