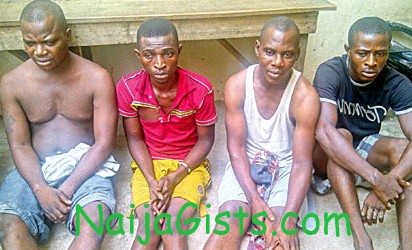 For those who accept water or other food items offered by unknown passengers in commercial vehicles, you must be careful as there are robbery gangs that now make use of this opportunity to rob unsuspecting passengers.

This has been discovered after the arrest of five members of a notorious robbery gang by operatives of the Special Anti-robbery Squad (SARS) of the Lagos State Police Command. The gang specialized in drugging unsuspecting passengers in commercial buses before dispossessing them of their valuables. Unlike their other partners who use their vehicles to perpetrate the heinous crime, the arrested suspects, as gathered, would board commercial buses and position themselves strategically to actualize their devilish act.

The way they operate includes trailing their targets either from the bank, or public places, right into a commercial bus. According Crime Guard, seven members of the gang would board same bus with their target while another would pose as a sachet water hawker. Unknown to their target the sachet water have all been sedated. One of them would then pretend to buy a sachet water from their gang (hawker), offering N20 note, only to be told there is no N10 note for his balance.

Pretending to be nice, the buyer would take another sachet of water and offer to their target, with the explanation that he did not want his money to be left with the hawker. And immediately their target drinks the water, he would fall asleep and in the process, have his valuables dispossessed of.

The gang however met its waterloo after a failed attempt to sedate one of its victims in Ikeja area of the state recently. Consequently, three members of the gang were apprehended. A Police source at SARS said “We have been on their trail for two weeks now. We got information that the same gang had robbed someone on his way from Ikeja to Yaba and the case was reported at Sabo police station. Driver of that bus and his conductor were initially accused of conniving with the robbers but after proper investigation, they were released with stern instructions to be on the look-out for members of the gang.

“Unfortunately for the gang, they boarded the same bus last week Tuesday and the bus conductor who was vigilant noticed them and raised alarm. They were about seven but three of them were arrested while four others escaped.

But during interrogation those arrested provided information that aided the arrest of two others. We are currently making effort to apprehend the gang leader who is currently at large,” he explained.

Culled from the Vanguard