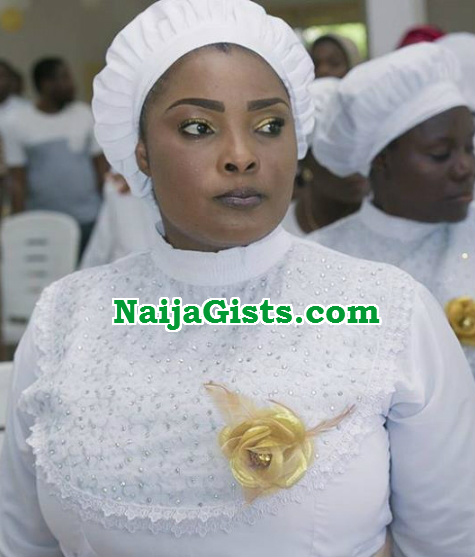 May 22, 2016 – Flakky Ididowo: I Was Born Into Celestial Church But My Parents Attend CAC

Did you join the ‘white garment’ church after your entry into the movie world?

I was born into the Celestial Church. When I was in the university, I also was attending the C&S church. But my mum and dad are very strong members of Christ Apostolic Church. But I like ‘white garment’, probably because I was born there.

The reason I asked the question was to know if being a member is borne out of the fact that they are believed to see the vision.

That is not the reason. I love white garment church a lot. In CAC too, they see things if they pray for you. But I love the doctrine of the ‘white garment’ church because I am a very spiritual person like I said earlier. And I am also an Alore; they are the ones who go into trance.

Being a very private person, how do you handle it when negative stories are written about you?

It has not been easy; especially when people hear things about you and don’t bother to hear your own side before going ahead to do the stories. That can be very painful. It is one part of the media I don’t like.

I believe in every lie, there is an atom of truth. I believe it is always right to find out what part is the truth. But now that it is the way it is, I bless God and pray that nothing like that comes my way anymore. As God is still God, I believe there is a way He does something probably to call you back to track or protect you from something.

What in the case where you want to find out the truth and you are being cursed?

Here are individual differences; some will be mature about it and some childish. I have an instance where someone called and said it is reported that I was fighting Fathia Williams because of Pasuma. And we were both at a location shooting. I had to call her attention to it and she spoke to the person.

There was another in a paper (newspaper), one time that Flakky Dido was badly beaten by an alhaji in Illorin, and I was lying beside my boyfriend at that time. He was the one who saw the story and showed it to me, and he was like, ‘if I was abroad, I would have believed this story.’ You don’t have to defame somebody’s career all in the name of getting your own job done.

I read Mass Communication in school and I know what it takes. That journalists have to write catchy stories, which is number one in story writing, but doing that, you shouldn’t invade other people’s privacy too in a very bad manner.

There is something we do, how people just say things like those actresses, ‘they like bleaching,’ ‘they like snatching people’s boyfriends.’ Do you know how many girls have snatched my own boyfriend or that I have caught with my boyfriend? How many people do I go to tell?

With all these being said, how have they been affecting your relationship?

Very badly. There was this guy I met then and he just didn’t want to let go the story of a blogger who posted a picture I took with the son of a make-up artiste, who looked like me, with the headline ‘Flikky Dido finally unveils son.’ Meanwhile there had been a story making round then that I had two sons for Pasuma, which also caused a fight between my cousin and another lady at a beach where she claimed she knew me personally, that I had indeed bore Pasuma two kids.

Is that why you have refused to settle down with a man?

Is it the one that I helped and the wife went to the media claiming that I snatched her husband that I want to settle down with? Where was she when I was helping the guy? It was when she saw him using two cars, which she knew not how he came about them that she now came out. Meanwhile she had left the guy when he had nothing almost two years. She said she had left him for me, when people started asking her where she was all this while. When I see the right person I will settle down.